This week is launch week for A House of Mud, and to celebrate, there’s all kinds of things planned. A ‘real-world’ launch is happening today at 4pm at Reader’s Companion in Armidale, and a virtual launch on Saturday (July 25) . The virtual launch will include both some great pre-recorded videos which you can view at your leisure on the United Publishers of Armidale website(will provide the link on Saturday), and also a live Zoom Q and A session with me, the illustrator Katrina Fisher, and publishers Peter and Kathy Creamer of Little Pink Dog Books, on Saturday at 3.30 pm. The Q and A session is free, but you need to book, here.

There’s also a wonderful activities page for the book on the United Publishers of Armidale website, which includes a presentation by me on the story behind the story of A House of Mud, a link to some great activities created by Katrina for kids, and this fascinating video by her on the stage-by-stage process of creating the beautiful visual world of A House of Mud. Enjoy!

It’s launch time for The Snowman’s Wish!  And I’m very happy to be hosting the virtual launch on this blog, in collaboration with my publisher, Dirt Lane Press. The virtual launch consists of three videos released at 10 am today, but which you can view at your leisure any time today–and well beyond!

The book is being launched by Australian Children’s Laureate, multi-award winning author Ursula Dubosarsky, and you’ll hear from her in the first video, then from me, in the second, as the author, taking you through the book’s creative and production process, and highlighting  my co-creator Ronak Taher’s superb illustrations. The final video is a reading I did of the book. So–welcome, thank you for joining our celebrations–and we hope you enjoy!

The book is now available in all good bookshops and library suppliers across Australia. You can read a review of it here.

Later this month and into next month, I am going to be having a very busy and very interesting literary time!

First up is the wonderful Historical Novel Society of Australasia Conference, which this year is being held at the University of Western Sydney in Parramatta, Sydney, from October 25 to 27. The biennial HNSA conference is one of my favourite literary events: there’s always really interesting speakers, a fabulous program, and a warm, collegial atmosphere. This year’s certainly no exception, and I’m privileged to be involved with the Conference in several ways: as a speaker, a workshop presenter, judge of the HNSA short story contest, and, a great honour, being the Conference Patron as well. Looking forward so much to it! Tickets are still available for this fantastic event, so check out the program here.

Next up is the Artstate Festival, to be held in Tamworth, October 31 to November 3. I’m involved in this in several ways, as an author, a small-press publisher, and a contributor to an anthology and an exhibition, both of which will be launched in Tamworth during that time. On October 31, wearing my Christmas Press hat, I’ll be participating, with my Christmas Press partners as well as  fellow local publishing house Little Pink Dog Books, in the Creative Hot Spot Publisher Pitch Day, which will give children’s writers and illustrators an opportunity to pitch work to one or both publishing houses.

That evening, I’ll don my author hat again, as a contributor to the fabulous anthology Dark Sky Dreamings: An Inland Skywriters Anthology, which is themed around people’s relationship with the sky in all its aspects, and which will be launched at a great astronomy-themed event, in conjunction with the Tamworth Regional Astronomy Club, at Bicentennial Park in Tamworth at 8.30 pm: telescopes and stars will be a feature of this unusual launch!

Then on November 1, I’m speaking at an Artstate/Arts North West event called Authors’ Cafe, where authors chat with readers and other interested people about their work. That the evening, I’ll be attending the opening of an exhibition called Art Word Place, which is an Arts North West project, where New England-based writers were paired with New England-based visual artists to create joint works. I’m one of the writers, and I had the good fortune to be paired with the fantastic painter Angus Nivison. His visual response to my poem is just extraordinary! If you’re in the region, come check it and all the other works out, the opening is on at the Tamworth Regional Art Gallery at 5.15 pm on November 1, but the exhibition itself is on till December 8.

There will be other events later in November that I’m a part of, in Armidale, Sydney and Melbourne, but I will write about them later, in a separate blog post. It is certainly a very busy time!

You are invited to come celebrate the launch of two of my new books!

Jack of Spades, a historical thriller for young adults with cover and illustrations by Yvonne Low (Eagle Books)

To be launched by Pamela Freeman

Once Upon An ABC, a glorious picture-book romp through fairytale and folklore, illustrated by  Christopher Nielsen (Little Hare)

To be launched by Paul Macdonald

Yvonne Low, Christopher Nielsen and myself will be in attendance to sign books.

Hope to see you there! 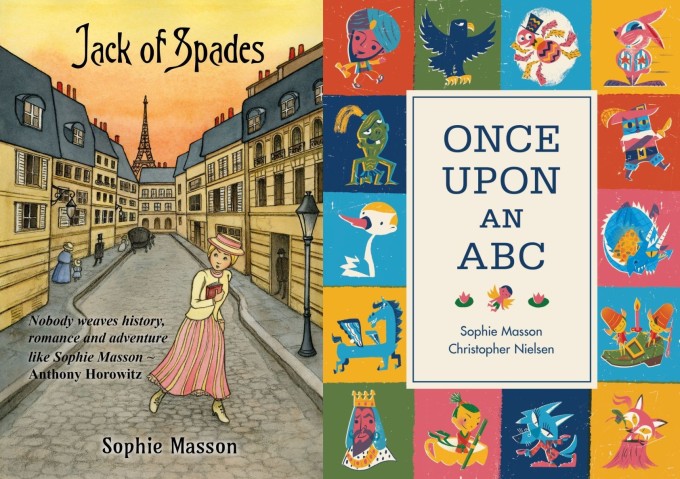