My latest picture book, Two Rainbows, illustrated by the wonderful Michael McMahon, came out this month with Little Hare and to celebrate I asked Michael to share his creation process for the book, which he’s done in this very interesting post. Enjoy!

I was first given a draft of Sophie’s Two Rainbows by my publisher Little Hare and was asked to imagine this little world of words becoming illustrations. When reading the story for the first time there were two things that I was struck by. One was the stories unique look at colour, and the other was Sophie’s original choice of words.

Stepping through the colours of a rainbow the reader follows a little girl as she begins to notice all of the colourful differences between the city where she lives and the memories of her home in the countryside. Sophie’s words give life to a simple story that highlights both the obvious and the subtle. Comparing the vibrance of the farm meadows to a muted bus-stop poster gives the story both a realistic and idealistic twist.

Illustrations are often simply coloured in, either to express emotion or create emphasis, but it’s rare for colour to sit at the forefront of a narrative. In that sense it was a nice change of pace to wonder how colour could be used in each scene. I often sketch and then start to put together each illustration, with colour naturally following on from this somewhere near to the end of the process. However, it was interesting that colour was now going to be considered first before touching pen to paper.

After reading each page, I would very quickly draw the first things that came to my mind, not thinking it through too much. I would then read the next part of the story and do the same. I like the spontaneity of this. After considering each page separately, I’d then start to sketch the story again and consider it as a whole – crossing things out and moving things around until it starts to form something I feel is working well.

This is how the messy sketches begin…

After the initial sketches, I find it important to start each book with a little bit of research. In a way, I feel it’s good for storytellers to know and imagine the world of their characters, a sort of ‘reading-before-the-lines’ not just between them. I imagined the little girl in the book growing up and spending her childhood in the countryside and then suddenly having to pick up everything and shift into the heart of a very far away city. I took my time photographing the inner suburbs of my own city to get a sense of where the little girl might live. I also went through troves of old photos of famous cities to create a kind of made up metropolis. I took inspiration from a lot of different places. 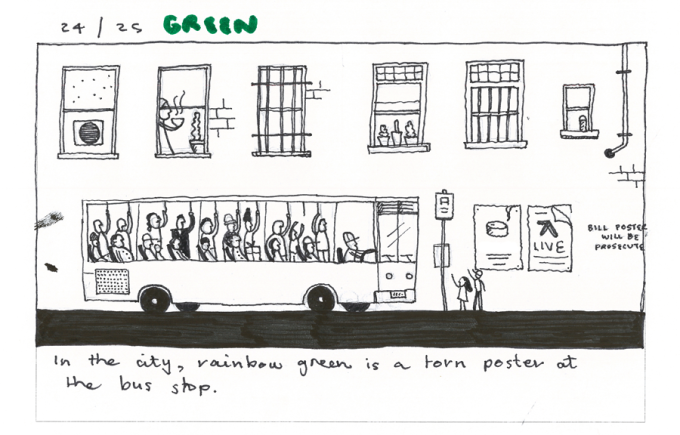 When the sketches are finished and placed alongside the text, I then start to put together the illustrations by adding more details and slowly refining each one until we have the finished book.

Delighted to show the gorgeous cover of Building Site Zoo, my picture book with the wonderful illustrator Laura Wood, which will be published in October by Hachette Australia!

‘Every morning on our walk we see an amazing zoo, full of astonishing animals. Come and see them too!’

A sister, brother and grandpa walk through town on their way to school, passing lots of construction sites as they go, seeing all the busy machines. They imagine that each one is an animal – the concrete mixer’s big round belly is like a hippo’s, the digger stretches its long neck like a giraffe, and the jackhammer hops up and down like a kangaroo.

Delighted to see a lovely review of Once Upon an ABC, my picture book with illustrator Christopher Nielsen, on the Awfully Big Blog Adventures blog. The review is by my friend and fellow writer Adele Geras, who not only writes fabulous books but fabulous reviews too! The review is here.