Just seen the first review of Sydney Under Attack, and it’s great! It’s by Ashleigh Meikle on the Book Muse blog. Here’s a short extract:

2022 marks the 80th anniversary of these attacks – which makes novels like this poignant and important. They remind us that everyone was touched by the war in some way – whether on the home front, on the battle fields, or through knowing someone affected by events far from where they lived, such as Mrs Stein being unable to help her family escape persecution in Europe. Sophie Masson not only touches on how Nick and his family are affected, but how Jewish people are affected, how people who have family stuck in other theatres of war were affected, and how assumptions about someone based on appearance can change when you get to know the person and understand them, and find out that they’re just a normal person, not a spy at all.

You can read the whole review here.

Sydney Under Attack officially comes out tomorrow, looking forward to seeing it out there! And the international blog Writer Unboxed, to which I’m a regular contributor, did a Take Five Q and A with me about it, which has just been published. You can read the interview here.

I am excited to reveal the absolutely stunning cover of my forthcoming historical novel for middle-grade readers, Sydney Under Attack, which is set in late May and early June 1942, at the time of the Japanese midget submarine attacks in Sydney Harbour.

The book will be published in March 2022 by Scholastic Australia, it was edited by Clare Hallifax, and the cover was designed by Chad Mitchell. Isn’t it striking!

Here’s the blurb of the book:

In 1942, 12-year-old Nick lives in Rose Bay, Sydney, with his mum, dad and sister, and dreams of becoming a writer like his dad. But with the world at war, Nick is constantly on alert for anything that seems out of the ordinary and then late one night he sees it! A plane! But no-one believes him! Then, the unimaginable happens. Sydney is attacked! And Nick starts noticing people behaving strangely. Is it just his imagination or something more sinister?

I hope readers will much enjoy this novel, which is as much a mystery and spy story as it is historical novel and war story. Nick was a great character to write–he is so lively, energetic, and imaginative, even if he does sometimes gets hold of the wrong end of the stick 🙂 And it was a fascinating book to research, too–trawling through documents, archival films and photos, and Sydney newspapers of the time (thank you, Trove!)

The book is part of Scholastic’s Australia’s Second World War series–it’s the third one, in fact. And I wrote the first in that series, too, War and Resistance, which was published in 2019. Sydney Under Attack also has a link not only to War and Resistance, but to another novel of mine, 1914, published in 2014, which was part of another series Scholastic published, Australia’s Great War. The three novels are linked through one French-Australian family, the Jullians, who appear in different roles in each of the three books, as main characters in the first two, across two generations, and as important but not main characters in the the third. It has been absolutely amazing to have been able to do that and keep the link through the three books! 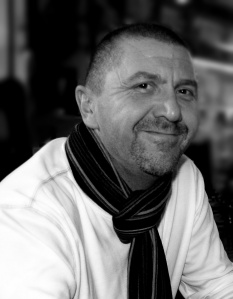 Today, Martin Chatterton writes about his new novel for kids, a middle-grade thriller called The Tell, which has just been released this month.

I’d been writing books for children across a variety of genres and age ranges before I ‘migrated’ into becoming an adult crime fiction writer. After I’d written three or four crime novels I started to think that writing a middle grade thriller in the style of my ‘grown up’ books might be a good idea. During that same time period, I was also visiting and performing/speaking at a large number of schools and literature festivals and, as someone who regularly switched genres and target age range of readers, I’d noticed that writers often altered their writing ‘voice’ when it came to stories for children. Often – in my humble opinion – that voice could sometimes be tinged with a patronising tone.

I didn’t mean that my ‘school’ thriller should be age inappropriate, just that it should be as visceral, paced and hard-edged as my crime novels. So that was the thought behind the project.

When it came to the ‘what’ of the story, I looked to doing the same things I was doing in crime fiction: namely, being interested in criminality as a subject in which those engaged in crime were not one- dimensional ciphers. After a chance conversation with someone who’d been raised in families where crime was normalised – was in fact, the family ‘business’ – I started to wonder about what that would be like, and soon realised that was going to be the primary subject of The Tell. There have been many (too many) novels, movies and TV shows set in the world of the gangster. Few, if any, have told that story from the perspective of a child born into a crime family. I set out to do just that: effectively to re-write a Godfather novel, only with the centre of the narrative lying not with Don Corleone but with his 14-year-old son (Rey ‘Raze’ Tanic).

This would be a coming-of-age story with a difference. It would invoke (I hoped) other stories in which young people run headlong into reality, accelerating their transition to adulthood (for better or worse). I

was thinking specifically of Stephen King’s novella, The Body, in which four twelve-year-olds set out to find the body of a missing young man. The Body (which was made into the movie, Stand By Me) skilfully sketches the emerging adults in the four protagonists. The Tell, like The Body, is anchored in reality: in The Body there is a dead body (‘The kid was dead. The kid wasn’t sick, the kid wasn’t sleeping. The kid wasn’t going to get up in the morning anymore . . . or catch poison ivy or wear out the eraser on the end of his Ticonderoga No 2 during a hard math test. The kid was dead.’) while in The Tell, the gangsters who rule Sydney are just that: gangsters. For Raze Tanic, negotiating his path through puberty is complicated beyond measure when he is thrust into the centre of a red-hot news story with his own family as ‘stars’.

Like a lot of writers I often ‘go back’ to myths, legends and William Shakespeare for inspiration and thematic ideas. Particularly Shakespeare, who is forever putting sons and daughters into conflict with their fathers. I visited Shakespeare’s family home recently (in Stratford-upon-Avon in England) and it was obvious that Shakespeare’s dad was a powerful figure in the town. He owned the biggest house and was well respected. It’s not hard to imagine Will rebelling in some way against that kind of authority. He certainly wrote about it in plays like Hamlet, Henry IV and King Lear. I actually ‘stole’ the idea of Dejan Tanic seeing himself as the ‘King’ of Sydney from King Lear: a play in which the King deliberately tries to make his children as ruthless as he is. And, in Hamlet, Shakespeare has Hamlet say this line about his (step)father, Claudius: ‘A little more than kin, and less than kind.’

That’s not a bad summary of the relationship between Raze and Dejan Tanic.

More about the book:

The Coffin is a maximum security facility holding the worst criminals in the country – terrorists, armed robbers, gangsters, cold-eyed killers and those too flat out dangerous to keep anywhere else. It was built for one reason and only one reason: to keep the wolves away from the sheep. It’s where my dad lives.

The Tell is a fast-paced, coming-of-age, Sydney-based middle grade thriller, centred on thirteen year-old Rey (‘Raze’) Tanic, the youngest son of Dejan Tanic, the self-styled ‘King of Sydney’, a feared organised crime boss currently locked up in the Deep Cut Correctional Centre. It is expected of Raze that he will soon join his elder brother Solo in the family business. During a visit to see his father in prison Raze tells his dad he’s not going to become part of the family business when he’s older. To Raze’s surprise, his father doesn’t react. That’s because Dejan has more pressing worries; worries that soon become a major problem for Raze and force him into making the biggest decision of his life.