My picture book with Christopher Nielsen, Once Upon An ABC (published by Little Hare), will very soon be officially released(though we had a pre-release launch on March 18!) and to celebrate I thought I’d write about the journey of my text, and how it developed over the two years since I first scribbled down the idea in my notebook. Because picture-book texts may look easy; but let me tell you, they are not!

So–the first glimmer came on a car trip to Sydney in March 2015–I was, I hasten to reassure you, the passenger, not the driver–when I suddenly thought of a great idea: what about an ABC book featuring characters from fairy tale, folk tale and legend? Now anyone who knows me knows I love my traditional tales, but you may not know I also love ABC books, when they’re clever..my favourite being Colin Mc Naughton’s hilarious, brilliant ABC and Things, published in the 90’s. What fun, I thought, and as I always travel with a notebook, out it came and I started scribbling down a few ideas for each letter, as well as a working title, Once upon a Time/Storytime ABC… Below is what that first handwritten draft looks like: 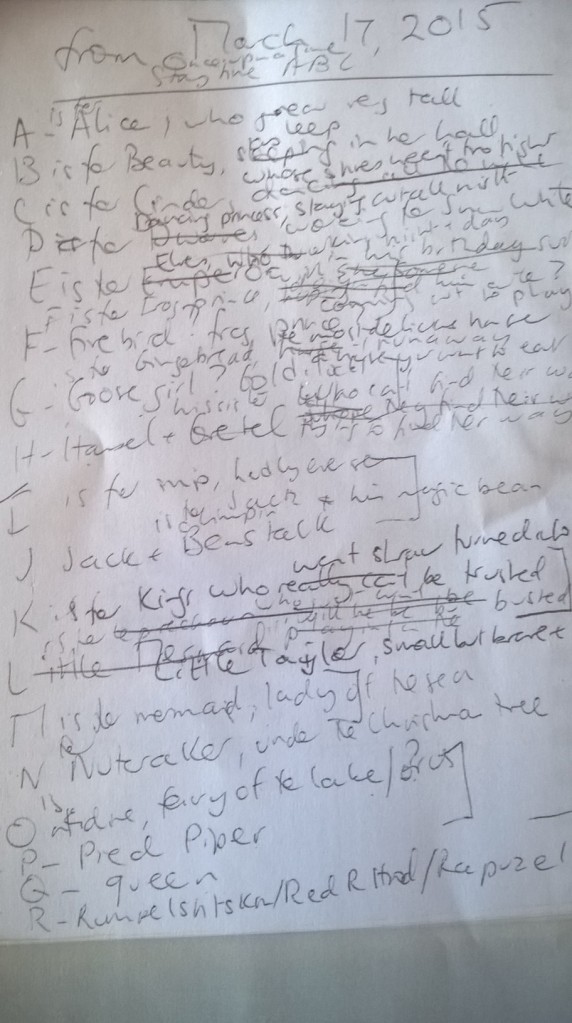 As you can see, it was still embryonic, with a few letters missing and a long way from the final text. But when I got back home, I edited the scribbles, added bits, subtracted others, tweaked the title to ‘Once Upon a Time ABC’, then typed everything up, and here’s the result of that:

It was at this stage that my agent Margaret Connolly first sent the text to Margrete Lamond at Little Hare who responded very positively, loving the idea and the feel of it. But she had a few comments and suggestions to make, such as that I should rethink the mention of Alice at the beginning and Nutcracker at N–that it was better to stick to genuine fairytale and folktale figures, rather than literary ones like those or legendary ones like Robin Hood (The vampires and yeti, too, went) And to replace Alice as A, she suggested, how about Anansi, that wonderful trickster spider-god from African folktale? I agreed very happily–and that gave me the inspiration to give the text a much more multicultural flavour generally.

Over the next few weeks, Margrete and I batted the text backwards and forwards over email, to get it into the best possible shape before it would be presented to an acquisitions meeting. This was a fantastic opportunity for me and my text, for Margrete is an absolutely brilliant and inspirational editor, with a very fine ear. It wasn’t just the characters and wording we discussed, but scansion and metre–the music of a text in verse, without which it sounds banal or clumsy. And the title changed too, to the much better ‘Once Upon An ABC.’ During this time, quite a few of the original characters left the scene, to be replaced by others, but many remained all the way through: for example, Puss in boots at C (cat) Dragon at D, Jack and his beanstalk, Rapunzel, Ogre, Trolls–and Zero the hero! Here’s a new draft, much closer to the final, but not quite there:

After this draft more changes were made, such as that Issun-boshi would be changed to ‘Inch Boy’ which is what it means in Japanese, and Brer Rabbit got ‘tar-sticky ‘rather than ‘very sticky’ feet–so much better! The fairies left the scene and Grandmother and Fox were split up 🙂 The next draft was closer still, but still not quite right:

Still there were tweaks–Grandma in the wolfskin coat was, Margrete felt, too dark for the age group, so I had to think of a different way of putting it–and the ‘tricksy’ fox was changed to ‘crafty’ while the nymph would be brought out from hiding! Meanwhile, Margrete was looking for the right illustrator for the text, so as to present the book as a package at acquisitions–and soon sent me a link to a wonderful new illustrator called Christopher Nielsen who she thought would be perfect. And so did I! And very happily indeed, Chris loved the text!

By now the text was deemed ready enough to go to acquisitions–and in due and very exciting course, I got the good news that it had been accepted, and that Chris could start work on the illustrations! 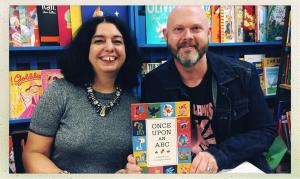 With Christopher Nielsen at the Children’s Bookshop, Beecroft

But that wasn’t the end of the work on the text, which I kept tweaking here and there with suggestions from Margrete and from another excellent Little Hare editor, Alyson O’Brien, till the text finally reached its final form(and to read that you’ll have to read the book!). On his side Christopher was beavering away on the illustrations. Then one day I got a very exciting email sending me samples of what he had been working on, some of which you can see here at his website. To say I was thrilled by the gorgeous world Chris had created to visually express and extend my text is to understate my feelings as I pored over his illustrations, with their striking blend of retro and contemporary, verve and humour, colour and dynamic movement.

And so now, two and a little bit years from that first scribble in the notebook, my text is in its final shape: as part of the beautiful picture book, Once Upon an ABC, where text and illustrations work together perfectly to create a world of magic, fun, mischief and surprise. It was a wonderful journey, that journey of the text, and I learned a lot from it. But it also reinforced something else for me: how very appreciative of the input of inspired, sensitive editors we writers should always be!