It’s my very great pleasure today to bring you a fascinating interview with my dear friend and award-winning Australian writer Wendy James who talks about her new book, The Golden Child, an utterly gripping novel which poses the disturbing question: how well do we ever really know our children? Elegantly written, with richly-textured backgrounds and subtly-depicted characters, this is a memorable novel that will have readers talking about it long after they’ve turned the very last page.

First of all, Wendy, congratulations on the release of The Golden Child! It’s an extraordinarily gripping novel which is also thought-provoking–and not a little chilling!– in its examination of the challenges of contemporary family life. Can you tell us about how it started, and did anything in particular inspire it?

Thanks, Sophie! It’s fabulous to have it out in the world at last!

The nature versus nurture question is one that I’ve always found fascinating.  And that’s where I started with The Golden Child. I wanted to very deliberately create a narrative that ran counter to Lionel Shriver’s We Need to Talk About Kevin. In Shriver’s novel, there was more than a hint that Kevin’s problems began with his mother’s ambivalence. I wanted a mother who, unlike Eva, wasn’t terribly conflicted about motherhood, who found it easy to nurture her children, who wasn’t disappointed in them, or frustrated by her lot.  And I wanted to think about what it might be like to discover that despite this, regardless of the effort, the environment, the endless love given — it can all go horribly wrong. What it might be like to discover that you don’t really know your child at all.

The story is told through several points of view, and not only as straight narrative, but also through blogs and websites and other online media. How did you juggle these very different forms in your writing?

I actually find it quite difficult these days to write a straight narrative from one perspective. There always seems to be another story, in the wings, waiting to be told., Another character, who sees things slightly differently. I guess that’s what interests me most about storytelling. It’s like acting, in that we get to become someone other than ourselves. As for the online narratives, I think online personas are so prevalent now, that it’s quite hard to write anything contemporary that doesn’t include some sort of online component. It’s becoming more and more pervasive in our lives, a big part of how we connect with others, and how we see ourselves. And I think for adolescents — as in my story — it’s now part of working out who they are, an essential element in their ‘becoming’.

Both Beth’s breezy blog and the sinister Golden Child site are masks, or to put it in another way, avatars of the real person behind each. One misrepresentation is innocent; the other is not. Do you think the virtual world encourages deception, and if so, why?

I think it’s more that it allows it rather than encourages it. Although sadly, the anonymity does tend to bring out the worst in some people — the bullies and sadists among us. Along with the whiners and those who suffer from opinion overload. It’s been such a sudden change, a revolution, and I think as in all revolutions, it’s full of frightening unknowns.  I guess it’s like being dumped ion an island with a bunch of strangers, having no rules or regulations, or notions of correct behaviour, and no laws.  It’s a free-for-all at the moment, for sure, but I like to imagine that we’ll calm down, and sort out some boundaries eventually. All the possibilities are exciting— but there’s frightening, damaging aspects, too. 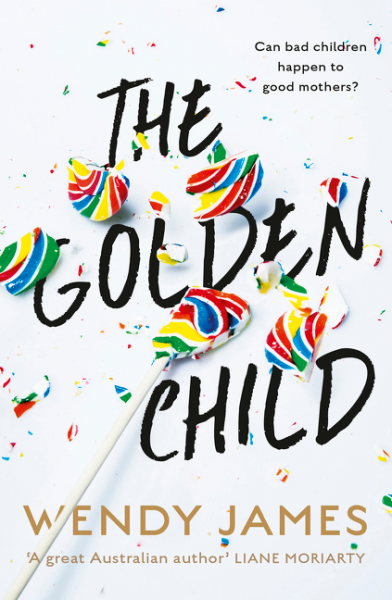 In The Golden Child you get, as you say, one character whose online life is a fairly benign confection:  Beth uses what’s available to make a good story. It’s something I’ve done myself, and I suspect that most writers do something similar to some extent — we all have to spin that straw of ordinary life into the gold of narrative. The other blogger, the Golden Child, is the true self unmasked — and rather malign self at that!

Social media shaming and cyber bullying are recognised society-wide phenomena and also constitute an added hazard for parents and children, putting final paid, in my opinion, to the never-very-trustworthy proverb, ‘sticks and stones may hurt my bones, but words will never hurt me.’  In your novel, the two mothers–Beth, the mother of the bully, and Andi, the mother of the victim–have to face the devastating consequences of the cruelties of online mob behaviour. Is there any way, do you think, that they–or indeed real parents–could have acted to prevent or at least minimise the damage?

I guess there are ways in which we can police our children’s use of the net far more strictly — there are parental controls available, and ways to stop them accessing certain information — but it becomes so complicated when kids need access for homework. It can be hard to extricate the necessary from the social. I think both Beth and Andi are caught unawares – Andi a little distracted by new motherhood, assuming that all’s okay with her eldest child, enjoying the slight loosening of the apron strings.  And then Beth, who doesn’t like that drift so much, but hasn’t any clue that all is not as it appears on the surface. She’s also so busy, juggling work, marriage, a move, renovations, mothers, children, her blog, everything. I think sometimes we forget that mothers ( and fathers) are also people themselves, who are still trying to sort their own shit out, as well as everyone else’s. And it has to be said that even though things are slowly changing, a greater portion of the emotional and logistical work of parenthood falls largely to the mothers, still. I’ve seen some reviews of the book critical of Beth and Andi, seeing them as being somehow negligent, but no one ever asks what the fathers were doing. And actually, nor do Andi or Beth; the blame is directed inward, as it so often is.

Your novel deftly portrays the different worlds that the adults (not just the parents, but also grandparents) and kids live in. They misunderstand each other often. Or do they? Are they really that different?

I do think there’s some interesting generational stuff going on, but isn’t that just inevitable, the way it always is?  I think these are as superficial as they’ve always been, and the real divisions are still more to do with personality and personal values than generations. For instance, not all teenagers think like Charlotte — that bullying is just how it is, and that we should all just get used to it. And yes, both the grandmothers dislike what they view as helicopter parenting, but for very different reasons:  one is worried about the moral ramifications of over-parenting and privilege; the other grandmother is scathing about what she sees as a type of emotional ‘mollycoddling’ — of allowing your children to be too sensitive.

Your depiction of the kids at the centre of the novel–Charlotte, Lucy, Sophie–is as satisfyingly authentic as that of the adult characters. Do you think there are differences when it comes to creating young as opposed to adult characters, and how do you keep it real?

You know, I actually never really think too hard about that! I was a kid once – and I have a pretty good memory of it. Or of how it felt, if not the details. And then, of course, I’ve been fortunate to be able to observe my own kids growing up. That of-the-moment authenticity is always tricky; it changes — and dates —  so quickly!  I did get my younger kids to check the language, and my daughter added a few choice phrases, and told me when things didn’t work. And in case anyone wants to argue the point, my kids and their friends do actually say lol aloud when something’s funny. That’s language change in action, folks.  LOL.

The mounting suspense in your novel, and the final plot twist, gives it very much the feel of a psychological thriller. Yet there is no straight-out ‘crime’ as such. How did you go about creating that sense of creeping menace whilst also keeping the novel anchored within ‘ordinary’ life?

I actually think that happened without any conscious help from me. Bad kids creep us out; it’s so wrong. And when you juxtapose this with the very ordinary domestic world, which is of course where some of the most horrible things happen, that sense of dread is ramped up exponentially. You know you’re meant to feel dread in a dark alley of a grimy city, surrounded by sinister strangers, but it’s a shock to find that life with nice middle class kids in sunny beachside middle-class suburbia can be as scary as hell too.

The Golden Child could be seen as part of the contemporary genre of so-called ‘domestic suspense’ to which novels such as Liane Moriarty’s Big Little Lies and Lionel Shriver’s We Need to Talk about Kevin might also be said to belong. Are you comfortable with such a description? And why do you think it’s become such a successful genre?

I am completely, in fact, regally happy — probably because I have actually been called Australia’s Queen of Domestic Suspense (thank you Angela Savage!). I think we get so much pleasure from this particular genre because these situations feel so possible; they could all happen to you.  When the betrayal comes from within, from someone you love and trust, it can be horrifying. And it can be impossible to know how to protect yourself. There’s literally nowhere to run, no way to hide.

Wendy James is the mother of two sets of siblings born eight years apart, in the digital and pre-digital ages. She is the author of seven novels, including the bestselling The Mistake. Her debut novel, Out of the Silence, won the 2006 Ned Kelly Award for first crime novel, and was shortlisted for the Nita May Dobbie award for women’s writing. She works as an editor at the Australian Institute of Health Innovation.

One thought on “The Golden Child: an interview with Wendy James”