In the third of my series on author-publishers, I’m interviewing Michael Wagner.

Michael Wagner is the author of more than 70 books for children which include the much loved, 20-book Maxx Rumble series (still in print after 11 years); a collection of delightfully silly and warm-hearted stories about a family called The Undys; the best-selling picture bookWhy I Love Footy; and many more.

Prior to becoming a children’s author, Michael worked for ten years as radio broadcaster with the ABC, wrote and produced award-winning television animations, and wrote everything from copy to songs and comedy. His latest challenge is starting his own micro-publisher called Billy Goat Books, with the first book, Pig Dude: He Can Do Anything! published in late August this year.

First of all congratulations on starting Billy Goat Books! What motivated you to start your own publishing company?

Thanks Sophie. Well, to be honest I was motivated by two things: fear of rejection and the desire to, sometimes, just sometimes, have total creative control over my work.

By ‘fear of rejection’ I mean that I’ve recently discovered that some of my writing just doesn’t appeal to many publishers, even though it has widespread appeal to kids in schools. I speak in schools a lot and often test stories out. In 2014, I wrote a book called Pig Dude: He Can Do ANYTHING! When it felt ready to read, I tested it in a dozen different schools, and I was thrilled by how it went. It received an overwhelmingly positive, and very spontaneous reaction, maybe the best reaction I’ve ever received for any of my books. I felt like I was onto something.

But, when I sent it to a couple of publishers, it was fairly flatly rejected. Feeling a bit taken aback, I took it back into schools and tested it again. Once again, it got that big, positive reaction. But something told me sending it to more publishers was likely to be a time-consuming and, most likely, fruitless exercise. (I may have been wrong, but that’s what my instincts told me) And I didn’t really want to face a string of rejections with something that seemed particularly viable to me.

Now, having something of an entrepreneurial streak, I decided to publish it myself. It was a relief not to have to go through the submission process and I felt excited about being able to get started straightaway and about having so much more creative control over one of my books. Something about that really appealed. So I formed Billy Goat Books and published Pig Dude: He Can Do ANYTHING! 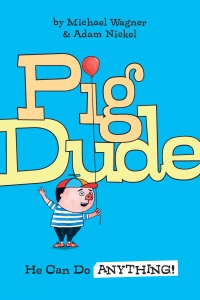 What inspired the name of your press?

What are your plans for the list? What will you be concentrating on?

As it costs quite a lot of money to created illustrated, printed books, I’ve decided to grow quite slowly – probably by only a book or two a year for the first few years. And, as I have a stockpile of my own stories ready to go, I plan to learn the business with books I’ve written.

I think, in a way, that’s fairer on other authors, because after a couple of years of learning how to create and sell books, I’ll be much better placed to provide a valuable service for others.

So, for now, it’ll just be my writing, but with the help of various illustrators, depending on who suit the different titles I have lined up.

What are the challenges and pleasures so far?

For me, there was an enormous learning curve. To minimise costs, I taught myself to design both the cover of a book and the interior pages – something I’ll have to learn all over again with each book, unless I employ a proper designer. That meant teaching myself software programs like InDesign and Photoshop – not easy!

And there are jobs like writing a contract for an illustrator, working out printing specifications, setting up distribution, creating Billy Goat Books, its brand and website, organising publicity, etc, etc, etc.

It’s a big job and probably best entered into completely naively, because knowing too much would be quite a disincentive. It’s best just to take it one job at a time.

On the other hand, if you’re creating a text-only ebook, the job is MUCH smaller. Printed books with illustrations are at the more difficult end of the publishing process, ebooks with only text are quite straightforward by comparison.

But, for me, learning new skills is exciting and having control over the product is extremely creatively satisfying. And when you hold what you’ve made in your hands for the first time, you know you did it yourself. So, on balance, I’ve enjoyed it immensely.

What do you think being an author can bring to your new career as a book publisher?

I think the big advantage many authors have is that they can test their material on their target audience. That takes a lot of the guesswork out of the publishing process.

Of course it’s not definitive. There are many successful books that would be incredibly difficult to read to an audience – like Goodnight Moon, for example. Really intimate books like that one are perfect for reading one-on-one, but might not work well with an audience. So not all fantastic books would test well. But when a book feels wonderful when it’s being read to an audience, chances are it’s worth publishing.

Being in front of kids many days a year allows authors to road test and refine some of their material and I think that’s a huge advantage. You really get the hang of what your audience likes when they’re sitting in front of you.

Any advice for aspiring author-publishers?

Hmm? Beware. If you’re printing illustrated books, it’s a lot of work and not cheap. But it’s very handy if you’ve been unable to land a publishing deal with something you truly believe in (having tested it with audiences), to be able to publish it yourself. Self-publishing or micro-publishing is a bit of a safety net, meaning you don’t have to simply shelve a manuscript you really feel is good enough (as far as any of us can tell that about our own work). It’s a fallback position, and that’s something authors have never really had before.