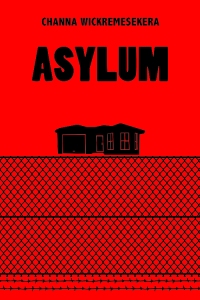 Today’s authors’ pick has been chosen by Sharon Rundle.

For the purpose of my research, I’ve been reading a lot of novels by South Asian-Australian authors with ties to Afghanistan, Bhutan, India, Nepal, Pakistan and Sri Lanka. I’ve read marvellous narratives from established and emerging writers. To choose one novel from this amazing array of fiction, is an enormous challenge. After long and difficult deliberation, I plumped for one that provided a new perspective, was surprisingly enjoyable, beautifully structured and written in a page-turning style.

Sometimes the best way to encourage discussion and provoke deeper thinking is through humour. Ideas that may seem simple on the surface havewider ripples and deeper currents than appear at first. So it is with Asylum by Channa Wickremesekera.

A young prison escapee decides to break into a home and take hostages,after the news that he is on the run with a gun is broadcast through media and police reports. The house he chooses is the home of Afghanis of Muslim faith. The mother wears a niqab, while her sometimes sullen, sometimes giggling young daughter, Aisha,wears a hijab. The mother understands English but prefers to speak in her Dari language.Through her family, she is the main negotiator with their captor. Khalid, the male teenage narrator with typical ‘attitude’, “I’ve seen bigger guns than that in Afghanistan with kids half his size” (p 23), is the perfect choice as the cynical observer. He is also a main player in the drama that unfolds as police surround the house. Negotiators are brought in to help, with mixed and sometimes hilarious results.

What could be a disaster turns into a tragi-comedy as the actions of the police and young man on the run with a gun become farcical when faced with this unexpected turn of events.

The Afghani family face another even deeper dilemma. Should they offer asylum to this person seeking refuge, as they believe they should? Should they lie to the police for the greater good? Which would give lesser offence to God? What to do in such an impossible situation? He is only a scared, tired, hungry, delinquent boy, after all. Khalid has heard it all before, “How you should look after people who take refuge with you, even if they are your worst enemies. Even if they had killed your own mother and father. I always thought that sort of thing happened only a long time ago and if it happened now it was only in the movies. Never thought we will have to practise it.”(p 40).

While the family debate the best plan, mum keeps cooking and feeding them all, including their captor Rusty.

This novel has impact and lingers in the mind long after it’s read. To my mind, ‘Asylum” should be on the HSC reading list. Suitable for both adults and young adults, the deceptively simple style and endearing narrator in “Asylum” allow for serious ideas to be discussed without polarising the audience. Many may be surprised by such a fresh perspective and by what they learn through humour.

Channa Wickremesekera is a Sri Lankan-Australian who has published three other novels, “Tracks” (published Sri Lanka, 2015), “Walls (Wasala, Sri Lanka, 2001)” and a novella “In the Same Boat” (Bay Owl Press, 2010).

A fun novel written in a jaunty teen voice—a novel that tries to tip our assumptions on their heads and succeeds.” —Anna Funder, author of Stasiland and All That I Am

“This is a timely novel, written with daring and imagination. It deals with themes that we urgently need to engage with and reflect upon, challenges that cry out for a long-overdue national conversation.” —Arnold Zable, author of Cafe Scheherazade, The Fig Tree, and Violin Lessons

Sharon Rundle has researched novels by South-Asian Australian authors published in Australia for a Doctorate of Creative Arts thesis. She is co-editor of Indo-Australian anthologies of stories published by Picador Pan Macmillan (2009 & 2010 India, Australia & UK), Rupa Publishing in India (2014) and Brass Monkey Books in Australia (2012 & 2014).