Four on the Run

PublicationSeptember 1st, 2020
Four on the Run, my chapter book with the fantastic illustrator Cheryl Orsini, will be published by Christmas Press in September. Find out more about the book and download a great activity pack here: https://www.unitedpublishersofarmidale.net/four-on-the-run.html 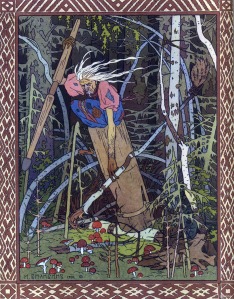 One of the strongest inspirations for me in the creation of the world of Trinity is a fact I mentioned in my previous post:  that not only does Russia have a long history of traditional magic, but that history continues to this day, with new strands added to it in more recent times. In the long centuries before the Bolshevik Revolution of 1917, pretty much every village had its resident koldun, sorcerer or wizard, and/or zhanarka, which literally means ‘one who knows’ but could be thought of as a witch. Magic in Russia has always been practised by both sexes, often in different ways–for instance, kolduns were thought to have the power of shapeshifting, while zhanarkas were more skilled in healing. These are not hard and fast rules–and female sorcerers and male healers certainly existed: but in an interesting contrast to the West, the female practitioners generally had a better reputation than the male–kolduns were often accused of unholy practices, and were thought to be damned. This feeling against kolduns and their malefic power was behind some of the popular revulsion against Rasputin, for instance. In contrast, even when they were feared, female witches were often thought to have a good aspect, with even Baba Yaga, the fearsome legendary witch of Russian folklore being seen as a protective figure in some instances–when she took a liking to you, that is! Her opposite number, the legendary wizard Koschei the Deathless, by way of contrast, had no redeeming features!

Some traditional practitioners of magic, male and female,  also specialized in such things as divination, fortune-telling and the like, while in Siberia traditional shamans had a strong following. All classes of society frequented these various kinds of traditional occult practitioners, and from the late 19th century onwards, as well, there began to be interest in ‘Eastern’ philosophies and systems of magic coming from places such as India and China.

However, unlike in the West, for many centuries there was little really organized persecution of witches, whether male or female, though that did not mean individuals didn’t sometimes suffer. Part of the reason for the absence of witch-hunts is that belief in magic was so widespread that ordinary people knew and used a few spells themselves. And the Orthodox Church has always had an uneasy relationship to magic, with some clergy dead against it and many others much more ambiguous, with respect for ‘white’ or sympathetic magic still very common amongst believers, and ‘black’ or malefic magic much feared still. On occasion however the country’s rulers have tried to limit or punish the practice of magic.

Tsar Peter the Great, for instance, who ruthlessly attempted to Westernize the country in the eighteenth century, enacted a law that made it a capital offence to practise magic or even go to a magician. This law was unworkable as his own courtiers frequently called on the services of magicians and so it fell into disuse. Later, in Soviet days, it became an imprisonable offence to practise traditional magic or the newer occult practices, with many people sentenced to stretches in the gulag for ‘obscurantism’ or ‘anti-social practices’, making magicians and magic go underground, only to surge back up with renewed vigor after the fall of the Soviets.  These days, the Russian government attempts sporadically to regulate both traditional and ‘newer’ magic, but do not try to ban it, knowing that millions of Russians use magical services frequently, with the booming ‘occult industry’ estimated as being worth at least 30 billion dollars. One lawmaker complained recently that the ‘pro-occult lobby’ was so powerful that it was very difficult to get any laws on the matter passed at all!

But along with the traditional magic which has remained, other, newer kinds of magic developed throughout the twentieth century and into now, and it too is booming. The Soviets might have banned traditional magic and New Age style practices too but they were very keen on psychic research and parapsychological phenomena. From at least 1919 onwards, the possible military and political application of extra-sensory talents such as remote vision and psychic communication—which in the past would have been known as ‘second sight’—greatly interested the Soviets, and approval for the research appears to have come from the very top, from Lenin himself. Other magical powers—such as the apparent ability of some people to kill, and resurrect, at a distance, were also investigated and the work of people like Semyon Kirlian, who invented Kirlian photography popular now with aura-readers, led to new semi-magical tools to be used.  This parapsychological research continued throughout the Soviet period, with psychics such as Nina Kulagina feted by the intelligence services for their abilities–in Kulagina’s case, she was shown as being able to not only being able to move objects about by sheer mind power(telekinesis) but apparently stopping, and starting, a frog’s heart! News of this kind of research in the Cold War led the United States to establish their own psychic research unit, dubbed ‘The Stargate Project’, which was subject to much ridicule.

Today, the research into parapsychology continues, with Russian researchers studying out-there things as varied as whether psychic abilities are encoded in DNA to how to develop workable ‘psychotronic’ weapons which might use laser, sound or microwaves or even simple electrical impulses to send ‘messages’ directly into people’s minds, thus artificially recreating what a psychic might do. Though the Parliament banned the use of ‘psychotronic’ weapons and tools a few years ago, in very recent times the Russian Defence Minister has hinted that research into them is ongoing–but in Russia, it is wise not to take such things at face value!

Meanwhile, the ‘Eastern’ style of magic which had first become popular in the late 19th century, is also flourishing, with Russians enthusiastic adepts of all kinds of New Age concepts and practices. As in the past, practitioners of magic can be as much male as female, though these days there’s less opprobrium directed towards the men. The number of practitioners in the various branches of the occult has been estimated as high as 100,000 people–more than the total number of doctors, making the practice of magic more popular than that of medicine! Certain areas of Russia have strong reputations for magic, and not always in the places you might expect: for while, for example, the forested northern region of Karelia has traditionally been said to have some of the most talented witches, the tough industrial city of Voronezh in south-western Russia is said to have the highest modern concentration of them! (Voronezh by the way seems to be a hotbed of ‘out there’ activity, as it is also associated with alien landings and abductions!) Meanwhile, people will still travel to Siberia specifically to seek out the wisdom of the shamans–while some shamans also set up shop in Moscow and St Petersburg.

All kinds of new beliefs have sprung up, such as stories of the listless legions of ‘energy vampires’ who suck vitality and initiative out of you(cure involves not only traditional garlic, but a good shower–a rather contradictory cure!), and the ‘guessers’ and soothsayers of the past have morphed into the ekstrasens (psychics), astrologers, aura-readers, Tarot-readers and numerologists of the present. Witches and wizards of the ‘white’ sort advertize openly in the daily columns of newspapers and take part in TV shows, while ‘the dark side’ is also reputed to be very active, though much more secretive, producing curses and jinxes for their customers. And ekstrasens and kolduns and the others are regularly consulted by all classes of society, from housewives to businessmen, TV producers to politicians, students to farmers, men and women, young and old, rich and poor.  Of course not everyone believes, but many people reserve judgement. In an uncertain world, who can take anything for granted?

One thought on “Trinity inspirations: Old magic and new psychics”