Four on the Run

PublicationSeptember 1st, 2020
Four on the Run, my chapter book with the fantastic illustrator Cheryl Orsini, will be published by Christmas Press in September. Find out more about the book and download a great activity pack here: https://www.unitedpublishersofarmidale.net/four-on-the-run.html

Today I am featuring a guest post by Alison Booth, writing about the inspirations of and background to her new novel, The Philosopher’s Daughters, whose official publication date is actually today–happy book release day, Alison!

The Philosopher’s Daughters is a tale of two very different sisters whose 1890s voyage from London into remote outback Australia becomes a journey of self-discovery, set against a landscape of wild beauty and savage dispossession.

For years the idea for The Philosopher’s Daughters just wouldn’t let me alone. I kept imagining 1890s London and two strong young women, the daughters of a widowed moral philosopher. Someone like John Stuart Mill, a great advocate for the emancipation of women. Someone who gives the girls a relatively modern upbringing. Then I thought of altering the sisters’ circumstances so that they separately choose to journey into remote and wild Australia. What might happen to them?  How might they see life at the ‘frontier’ once they are confronted with the brutal dispossession of the Indigenous population? How would their characters develop as they faced danger?

The second half of the novel, set in 1893, mostly takes place in the Northern Territory of South Australia. Together with the top of Western Australia, this was one of the last areas of the continent to be appropriated by white colonisers.  At that time and in that part of Australia, the frontier wars were still being fought, largely over the establishment of the cattle industry, although they weren’t recognised as frontier wars back then. Indeed, only relatively recently has the full extent of settlement massacres and beyond been documented. See this article: https://www.theguardian.com/australia-news/ng-interactive/2019/mar/04/massacre-map-australia-the-killing-times-frontier-wars

A theme that has long fascinated me is how children are shaped by the preferences and attitudes of their parents. And the closer we are to a parent the harder it can be to move away from their influence and develop in one’s own right. This is the burden in The Philosopher’s Daughters that is carried by 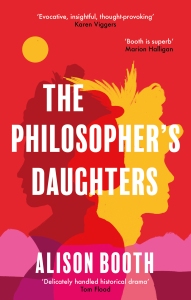 Harriet Cameron, the older of the two daughters. It takes her some time – and a journey to Australia – to learn who she is and to slough off some of her father’s expectations about what she should do with her life.

The Northern Territory has for many years held a particular attraction for me. This began with my own father’s reminiscences of the years he spent there as a very young man after the 1942 bombing of Darwin by the Japanese, an experience that was crystallised into his evocative novel Up the Dusty Track, published by what was then the NTU Press. I visited the Northern Territory for the first time in 2002 for the Darwin launch of his novel.

On that Darwin visit I not only fell in love with the Territory landscape but also witnessed a level of casual racism that I found quite shocking. I wanted to write about it, but it took me some years to work out how I was going to do it, although right away I knew it had to be historical.

In doing the background research for the novel, I was aware that, for our history, we rely upon the words of others. And when we read those words we should ask ourselves whose stories are missing. Typically, it will be the stories of those who held no power at the time. The women and of course the Indigenous inhabitants. They are who The Philosopher’s Daughters is about.

Connect with Alison on social media: