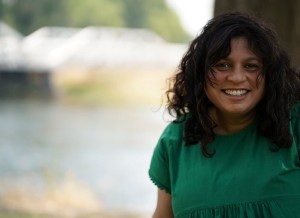 Today I’m featuring a guest post by Sulari Gentill, whose new novel, A Testament of Character, the 10th book in her fabulous historical crime series, the Rowland Sinclair Mysteries, has just come out.  Sulari and her family, who live near the southern NSW town of Batlow, have only just come out of devastating experiences during the recent bushfires, only for this new crisis to hit just as something positive, an eagerly-anticipated new book release, was about to happen. But in this lovely post she writes with her usual light touch and deft thoughtfulness about what it’s like to write a long series that you never really expected to embark on in the first place. (By the way, the whole series is highly recommended, and the perfect candidate for binge reading in these stay-at-home times–and you can even join Rowly’s Facebook fan club here.) 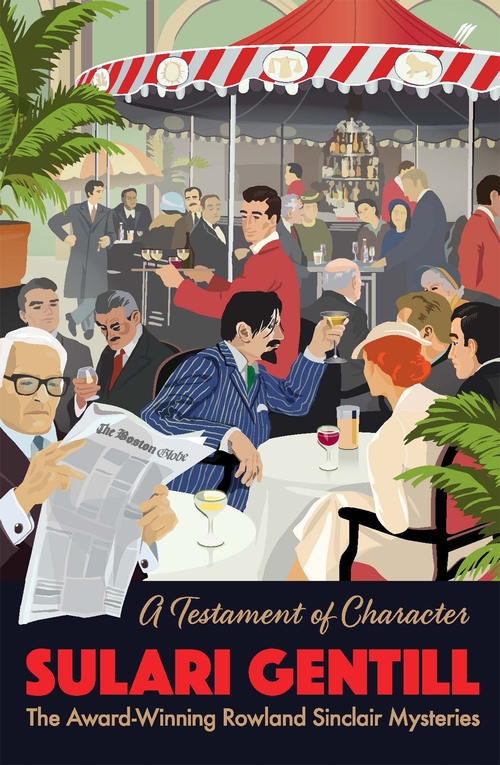 ’Til Death Do Us Part

Writing a novel is an exercise of new love, a mad, impulsive, passionate thing.  Consuming, and while it lasts, everything.  The decision to enter into the endeavour is so often irrational, made for now with no real thought of the future.  It is probably possible to be drunk throughout.

Writing a series is a more serious commitment, a pledge a fealty for good times and bad.  It has complications.  You are creating not just one story, but an institution, you are inviting reliance and expectation and scrutiny.  It is essentially a marriage.

So why would a writer, a mystery writer in particular, choose literary matrimony over the freedom of successive new loves?  After all, mysteries are by their very nature discreet stories.  And yet the genre seems rife with long-running series.  Like all affairs of the heart, there are reasons why both writers and readers choose to commit.

The Rowland Sinclair Mysteries now comprise ten books, the seventh of which—“Give the Devil His Due”— was released in the US in January 2020.  Of course, wedding rings are rarely exchanged on the first date, and I didn’t begin by writing a series—I was simply writing a novel, a standalone mystery set against all the social and political turbulence and upheaval of the 1930s.  I wanted to talk about a particular sequence of historical events, when Australia and the world teetered on the brink of Fascism, and into that I wrote a brutal murder and the struggle of one man to define where he stood in a world of increasing polarisation.

When the story that would become my debut novel — “A Few Right Thinking Men”— first caught my eye, I was inexperienced and woefully naïve about matters of pen and heart.  I was still a practising lawyer then, and I thought I was simply flirting with the literary arts.  I would write a novel, be able to say that I’d done so, and move on to another hobby—perhaps I’d restore a vintage car, or breed alpacas…  This would be a fling between a consenting adult and her imagination; Rowland Sinclair and I would enjoy each other’s company for a while, but in the end, both the book and I would stand alone.

So what happened?  Why did I settle down? 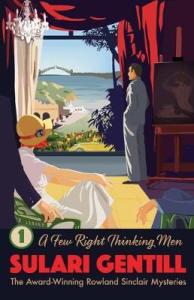 I suppose the answer is that I couldn’t forget him.   He presented me with a personal story arc that was greater than that one story, a larger mystery about how a man stands against a world that seems to be descending into extremism and violence, where democracy is being challenged, and entire peoples cast in villainy.  And he whispered that history repeats.

A trilogy, I thought.  This would be a trilogy!  Afterwards, I’d still be young enough to meet other imaginary people.

In the second book Rowland took me abroad on an ocean liner.  Dinner suits and dancing, romance, opulence, and an abundance of all things…  including bodies.  It was glamorous and exciting and dangerous.  He introduced me movie stars, mystics, and tycoons, and to the religious fundamentalism and intolerance that bubbled beneath the surface of the era.  It was intriguing and disturbingly familiar.   I began to recognise a pattern.

In the third book I took Rowland home “to meet the family”.   I introduced him to the Australian High Country where I live, led him into the rugged mountains where more than bodies were buried. And he showed me the growing political paranoia that that had permeated west into the outback, and that political principle was often entangled with personal hurt.

At some point during the writing of that novel, I came across a newspaper article which reported that Rowland’s nemesis from the first book, Eric Campbell, (an actual historical figure who led one of Australia’s largest Fascist movements) was travelling to Munich to meet Adolf Hitler and bring European Fascism to Australia.  And the man I’d created would not let that lie.  Rowland was determined to follow Campbell to Germany, to stop him. Well, I couldn’t very well let him go alone…   and so a fourth book was added to my “trilogy”.

Germany in 1933 proved to be a game-changer for Rowland and me.  As we stood together in the Königplatz, watching the Nazis burn books, I realised this would not be over anytime soon.

In the rhetoric of contemporary politicians, the growing divisions of today, I heard an unmistakeable echo of the 1930s, and I became scared.  And so I committed to seeing  this strange relationship through every mystery, every small murder that took place against the lead-up to mass murder,  to stand by Rowland Sinclair as he carried on investigating, resisting injustice and trying stop the world hurtling towards the disaster of humanity that was the second world war.  Of course, I knew that in this last thing, he would inevitably fail, but I decided to stay anyway.  Perhaps I could give him a voice to warn a different generation.  Or perhaps he would simply help me to understand the madness of my own time.

And so here we are: the author and hero of a long-running series.  This is no longer a new love, but a marriage, based on a common horror of then and now.  Occasionally, I dally with other novels, play the field a little in other genres, but I never to fail to return to Rowland, and he to me.  There are many more mysteries to be investigated, many issues we still need to talk and write about.  As each crime is solved, each novel concluded, I remain convinced, it’s not over yet.  I confess I am often still giddy and drunk with love when writing these books, but there is a sober direction, a message and purpose to all this murder.

Connect with Sulari on her author page on Facebook