Great to welcome Hazel Edwards to my blog today, to introduce us to her year’s favourite books.

Best problem-solving book of strategies I’ve read in last two years.  Who else would sew bells on toddlers’ socks, so you didn’t lose them? The toddlers not the socks.

A great title. ‘Blindness for Beginners’ applies to those losing their sight and those who need insight into how to live or work effectively with a person who is blind. But this autobiography is also relevant to a broader audience of those wishing to solve problems more creatively. It offers strategies.

Maribel is a creative-problem- solver in any culture. She began to lose her sight at fourteen, a crucial age of self awareness. Being prepared to volunteer and try new challenges such as technology, is a survival skill. So is challenging misconceptions about ‘labels’. Even getting the terminology right is a challenge for those outside a culture. Do you say ‘blind’ or ‘ partially sighted’ or ‘disabled’ or….?

Maribel’s writing strength is the day-to-day anecdotes of creative problem-solving and the humour with which it is shared.  (Maribel has four adult children now). Being prepared to learn new technology like ‘Where the Hell am I?’ app or mastering JAWS, the digital device turning printed words into sound. And being willing to take on invitations such blind cooking on TV, or  speaking at an international conferences and actually travelling there, complete with humorous cartoons on a Powerpoint. And the chapter from the guide dog’s viewpoint provides another insight.

Maribel capitalizes on her strengths. And we all need to do that. Her acute hearing, singing voice, musical understanding and trained memory have enabled her to devise new ways of participating both in work and social life. She’s willing to ask for help, or to decline it because she has worked out the best way beforehand. Preparation meeting opportunity is an apt definition of success.

I first met Maribel about ten years ago at a Christmas drinks party for the Australian Society of Authors. Her organized approach to writing and even getting around with minimal fuss impressed me. Occasionally I gave her a lift and once I got lost, even using my GPS.  Maribel got us to the event at the right location, on time that evening.

The significance of Maribel’s book is not only that she has physically written it, despite visual challenges, but that the content is likely to inspire others to find their individual solutions to lifestyle challenges whether blind or sighted.

Maribel with Hazel at Writers Victoria launch of the book

The most uplifting self-help book I’ve read this year. And the autobiographical anecdotes are the most inspiring part, such as colour coding her clothes and having her handbag with tagged items., and a ‘feelie’ kitchen.

I’ve learnt a lot.  Courage is about being prepared to try within the limitations you are given. And ‘Blindness for Beginners’ gives insight.

This Christmas, friends will get the print book, autographed on Maribel’s amazing enlarger attachment on her computer. But it’s also an audio book, which makes sense.

The second recommendation is: 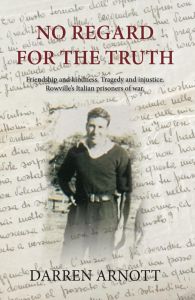 Darren Arnott,  No Regard for the Truth,  BookPOD.

Few locals today know that an Italian Prisoner of War camp existed in outer suburban Melbourne at Rowville. Even fewer knew about the fatal shooting which occurred and the legacy of the romance between a local girl and Rodolfo Bartoli ,an Italian POW awaiting repatriation to Italy after the war ended.  Author Darren Arnott located the now 90 something ‘girl’ in Queensland and her relatives attended the launch.

Has made an excellent podcast with Melbourne’s Herald Sun and was featured in their Black and White Column in early December 2019.The Italian community has been delighted featured it in Il Globo  and this book is already reprinted.

No Regard for the Truth: Friendship and kindness. Tragedy and injustice. Rowville’s Italian prisoners of war.

Who had no regard for the truth?

The bureaucratic authorities or the camp commandant of the Italian POW internment camp in Melbourne’s outer suburb of Rowville after WW2 in March 1946?

A young Italian POW was fatally shot for dubious reasons near a disputed camp boundary. His Australian girlfriend’s family were not the only ones to mourn.

Well crafted ,historical detective work based on court reports and archival photos, which enable the readers to come to their own decision, so the writer Darren Arnott does have a regard for the truth.

A poignant romance but also an historic story which raises questions about inept administration having tragic consequences.

Darren Arnott workshopped his manuscript at the Public Record Office ‘Complete your book in a year’ class and utilized the Archives for photos, transcripts and fact checking. Arnott is very even -handed in the way he presents the evidence in the form of court transcripts, letters, photos and interviews. This impartiality enables the readers to make their own decisions on whether the shooting of Rodolfo by Captain Waterston the camp commandant of the internment camp was the inept action of a drunken , bullying officer or an accident. And whether the subsequent reports were cover ups or mismanagement.Many quotes included from the Inquiry. The Inquest report was marked Secret due to censorship controls being lifted and concern former POWS would read the report and cause a fuss.

But the real story is a romance of the author following clues to find the former Australian girlfriend who is now a 90 year old woman living in Queensland. And Arnott’s tactful interviewing. Supported by the careful accumulation of evidence. 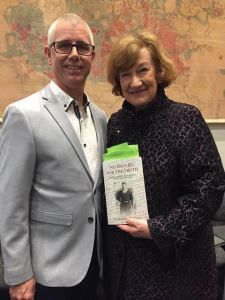 Darren Arnott with Hazel at launch of book

Arnott is not of Italian heritage but he did live in Rowville as a child and was intrigued by the camp remains near his front yard. He has since revisited the historic markers mentioned in his book. A Melbourne based IT Consultant, Arnott enjoys clue seeking and has also studied archeology.

No Regard for the Truth is likely to be of interest to historical writers for the research techniques used, the Italian community ,military historians and those locals who might be surprised what happened earlier in their own suburb. Poignant stories have to happen somewhere, even in what is now suburbia, but was formerly a wartime internment camp.

Hazel Edwards(front of pic) at Vision Australia Radio and podcast

Best known for ‘There’s a Hippopotamus on our Roof Eating Cake’ (PRH) which celebrates a 40th anniversary in 2020  , Hazel Edwards writes for all ages and takes cultural risks with subjects. Co-written with Muslim librarian Ozge Alkin, junior novel  ‘Hijabi Girl’ has been adapted for a puppet musical by Larrikin Puppeteers for Book Week 2020 and ‘The Boy Within’ is a comic graphic novel about trans youth coming of age  just funded by Creative NZ and  inspired by ‘f2m:the boy within’ will be out 2021. Co-written by transguys Ryan Kennedy and Sam Orchard.

Hazel Edwards’ latest adult mystery publication is ‘Wed, Then Dead on the Ghan’ (KINDLE) a mini sequel featuring her diverse gender sleuth Quinn who solves mysteries and the occasional murder at weddings, funerals and naming ceremonies.

‘Celebrant Sleuth: I Do or Die’ is now available on AUDIBLE, https://www.hazeledwards.com/celebrant-sleuth.html  for details.