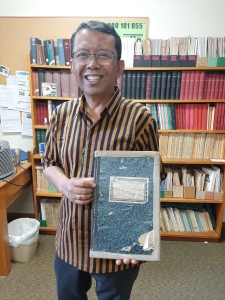 I was really delighted yesterday to meet the wonderful Dr Joko Susilo, world-renowned dhalang (master of traditional Javanese shadow-puppetry, the wayang kulit) , who’s been Artist in Residence at UNE  for the last few weeks. An eighth-generation dhalang from Cenral Java, Joko has been based in New Zealand for some time, and travels around the world to give performances, talks and other presentations.
I contacted Joko to show him one of my family treasures: a rare, handwritten Javanese-language ‘Boekoe Pedalangan’ or ‘Book of Puppetry’, which my French parents, who were very interested in the wayang kulit and Javanese culture generally, bought when they were living and working in Java in the late 50’s and early 60’s (and where I was born). I’ve always been in awe of this book, and was thrilled when my father gave it to me a couple of years ago, but I have  wanted for a while to ask someone who knew what they were looking at to let me know me more information about the book. Well, Joko was absolutely the perfect person, as he is not only a practitioner but also a respected scholar of the extraordinary and magical art of wayang kulit.
He was very interested indeed in the manuscript and I learned quite a bit about it from him as he leafed through it: that it came from the Central Javanese city of Solo(which like Yogya is at the heart of Javanese traditional culture), that it was written in High (literary) Javanese by a professional dhalang, someone well-educated and highly-literate–not very common at the time, Joko thought it might possibly have been someone who worked within the kraton, the palace, of Solo– and that it contains the full script, including narration, instructions to puppeteers and gamelan orchestra, as well as actual gamelan notation, for a famous epic wayang kulit play which goes on all night (at least 9 hours long).
As well as that, there is a shorter section at the back, which Joko revealed is actually an unusual collection of traditional Javanese magic charms and spells. The charms are for all sorts of purposes including one, Joko was amused to discover, against sleepiness (sleepiness being an occupational hazard of course for dhalangs who are performers of all-night plays!) He confirmed that this is indeed a very rare book, especially given its excellent state of preservation(my parents having very carefully looked after it for decades, ever since they first got it and of course I’ve done the same). So fantastic to learn more about this treasure–and Joko is keen to transcribe the book in its entirety at some stage, which is wonderful! 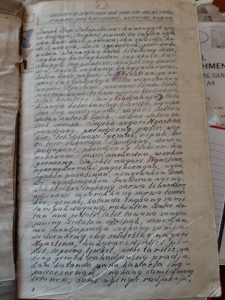 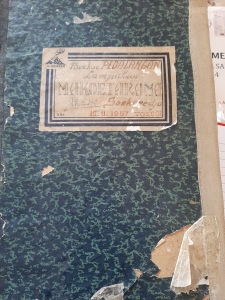