This novel introduced my child self to the grown-up pleasures of having your heart broken by a book. Elidor, a slim novel published in 1965, is one of the greatest fantasy novels ever written. It lures you in by beginning as a classic portal fantasy: that is, the main characters enter Elidor, ‘Green Isle of the Shadow of the Stars’, through a ruined church in the bombed-out suburbs of post-war Manchester. The four children find themselves in an eerie, dying land and encounter trials of evil magic before being entrusted with four relics they must guard back in Manchester to keep the last of the light alive in Elidor. But the darkness of Elidor follows them into their seemingly dull everyday world. Here the book becomes more SF horror than high fantasy (its moments of suburban satire intensifying the terror), with its ending modulating to tragedy in the key of Celtic Twilight.

This perfect book is described by Garner himself as the ‘anti-Narnia’. It is scary and sad and refuses the child reader the pleasure of exploring its fantasy world. Instead its terrors erupting onto the streets of Manchester are gripping; only as adults do we see how Elidor not only  parallels postwar England, but is of course itself England, with the adults in that fantasy land having no more idea of how to hold back the darkness than did the adults during World War Two. Garner has talked about how he used scientific parallels for magic in the book with static electricity being one form that Elidor’s magic takes in Manchester. This is how Garner weaves SF into his fantasy, and it’s a very powerful device, making the magic feel real in his modern setting and denying the reader the comfort that scientific rationality will defeat the darkness. 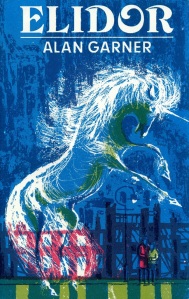 All of the Moomintroll books are enchanting but this book deals in the Romantic sublime. This captivated my child’s imagination before I ever heard of the concept of the sublime – the shiver of awe we feel at the beauty and terror of that which is great beyond human understanding: sheer mountains, vast Deeps, the infinite reach and darkness of space. This book delivers all of that as Moomintroll and his friends go on a quest to the Lonely Mountains to ask the astronomers what to do about the Comet threatening Earth. This book even has a kickass heroine in the form of the vain Snork Maiden, who saves Moomintroll from a giant octopus.

The darkest, most Gothic and most convincing Narnia tale. I loved it for its epic quest through terrifying settings and its philosophical meditations on the nature of reality. Its pivotal scene is a gripping retelling of the parable of Plato’s cave (of course as a child I didn’t know this). As always with Lewis, the villain, challenging male authority, is a beautiful powerful woman, in this case a witch who kidnaps Prince Rilian, son of King Caspian. Using her engine of enslavement, the Silver Chair, she plans to turn the Prince into her puppet to allow her to rule Narnia.

Two children, Eustace Scrubb (the reformed brat from The Voyage of the Dawn Treader) and fellow victim of bullying Jill Pole, are sent on the quest to rescue Rilian by teaming up with one of Lewis’ most charming creations: the hilarious Marshwiggle Puddleglum, whose idea of looking on the bright side results in ghastly statements worthy of Eeyore such as: Now a job like this–a journey up north just as winter’s beginning, looking for a Prince that probably isn’t there, by way of a ruined city that no one has ever seen–will be just the thing. Puddleglum, one of the great pessimists of English literature, turns out to be the bravest and most stalwart friend any frightened child, or Prince, could ever wish for.

The Silver Brumby – Elyne Mitchell – the beauty of wildness

As a girl I loved horses and riding above anything except swimming. The thrill and danger of riding, the scent of gum trees and saddle leather and horse sweat, the exhaustion at the end of each day, all this was exhilarating. When I wasn’t riding, I loved reading horse books – Thunderhead by Mary O’Hara and the Black Stallion books by Walter Farley. When I came to Australia I was enchanted by the Silver Brumby books which not only thrilled me with tales of wild horses in the Snowy Mountains (I preferred wild horse stories) but introduced me to the beauty of the Australian bush.

Freedom is Slavery. Ignorance is Strength. War is Peace.

This may seem an odd choice for a childhood favourite but so it was. I read it when I was twelve and instantly its images and lines and ideas were engraved on my brain. How true and how loud do those slogans ring now in our post-Trump election, post-truth world? For a writer, 1984 is the key text, its meditations on the relation of language to politics and consciousness some of the most important ever written: But if thought corrupts language, language can also corrupt thought. Orwell is one of our greatest writers whose work keeps language bright and sharp as a weapon against lies, a tool for truth against those who want to enslave our minds.