For a bit of fun today I’m republishing a piece of mine that was first published some years ago, about Harry Ashton-Wolfe, an absolutely wonderful–and unintentionally hilarious!–true-crime writer of the so-called ‘Golden Age’ of the detective craze, in the 1920’s and 30’s. He inspired one of my own characters in The Case of the Diamond Shadow-and to all crime writers out there, he’s really worth rediscovering!

So here’s the article, below. Enjoy!

Some of my favourite book finds have come into my hands not by word of mouth or reviews or prior knowledge but by sheer chance: the eccentric jewel suddenly spotted amongst the lucky-dip gimcrack of  junk shop and school fete, car boot sale and charity shop shelf. And these days, very often in that virtual combination of all those venues, the Internet.

It was thus I made the serendiptous discovery of the priceless but sadly forgotten works of celebrity criminologist and true-crime writer of the 1920’s and early ’30’s, Harry Ashton-Wolfe. Browsing on the Net one day, looking up Conan Doyle sites with the vague notion of Sherlock Holmes appearing in a detective novel for young readers I was planning, I stumbled across a casual reference to a H.Ashton-Wolfe, writer of true-crime adventure bestsellers, who claimed to know not only Holmes’ creator, as well as the leading lights of the French Surete and Scotland Yard, but also just about every famous criminal and outlaw of the day!

Several hurried orders from second-hand bookshops later, I had built up a mini-library of Ashton-Wolfe’s books, with their gorgeously pulpy titles, such as Crimes of Love and Hate, The Thrill of Evil, Outlaws of Modern Days, and The Forgotten Clue. And I plunged into the addictive joys not only of the melodramatic and exotic cases recounted in racy prose, but the vain and boastful character of Ashton-Wolfe himself, which infused the stories with unintentional hilarity. So immediately engaging was this combination that I immediately dropped Sherlock in favour of a certain Philip Woodley-Foxe, whose adventures are legendary, not least to himself. No prizes for guessing who he was based on!

master of disguise and shameless name-dropper, Harry Ashton-Wolfe doesn’t just recount the cases, he inhabits them. He’s an important part of investigating teams in Paris tracking down fiendishly cunning criminals, such as the Eurasian Hanoi Shan; he gets locked up and threatened with death by vicious gangsters; he is at the elbow of the greatest forensic scientists of the day, such as Edmond Locard of the Surete, and earlier, the legendary Alphonse Bertillon; he is allowed to peruse the ”secret archives” of the Paris Prefecture; by chance, he recognises a famous anarchist bandit, Jules Bonnot, as having once been his chauffeur; he dons disguises such as that of a Parisian apache or a Corsican bandit to infiltrate criminal rings(delightfully, his books sometimes include photographs of him in disguise, complete with picturesque hats and moustaches!)

Airily, he recognises that ‘It is rather strange, when I look back, to think how often I have found myself involved in events that later passed into history,’ (The Underworld—a Series of Reminiscences and Adventures in Many Lands), but he doesn’t let that slight improbability deter him in the least. Time after time, he’s in at the kill—helping to nail a vicious poisoner or uncovering a sensational tranvestite murder or catching a crook who’s passing off fake diamonds. He describes the most sensational murder methods—such as kittens whose claws have been tipped with deadly tetanus baccili; centipedes used as murder weapons; and in an echo of Edgar Allan Poe, an ape trained to kill! Rather scathing about most detective fiction—aside from Conan Doyle’s, to whom he dedicated Outlaws of Modern Days—he nevertheless uses every trick of sensational fiction, including catchy titles, breathless first-person narration, cheesy dialogue and moralising asides. He offers titillating portraits of famous murderers, gangsters and outlaws, and lovingly sketched examples of criminal wickedness. But there’s always a moral: not only are these bad people bad, but they will inevitably be brought to book by the superior methods of modern scientific crime-fighting. His touching faith in these methods—which he describes in detail in The Forgotten Clue– is such that he is convinced they will shortly put 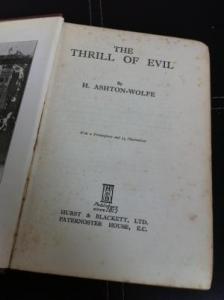 an end to all crime.

Mostly, he writes about modern cases(at least, from the 1890’s onwards) but in Tales of Terror—True Stories of Immortal Crimes, he looks at older real-life mysteries fictionalised by writers such as Alexandre Dumas: the Man in the Iron Mask, the Count of Monte-Cristo, the Affair of the Diamond Necklace…You get the distinct impression that he thinks modern scientific methods would surely have made short work of elucidating them!

So who was H.Ashton-Wolfe, this tireless go-getter chronicler of crime? In The Underworld he offers something of an  autobiography, and colourful it is too (sample chapter titles: The Episode of the Clairvoyant Countess’, ‘La Glu—Apache and Gentleman’; ‘The Motor Bandits’; The Blue Anchor Mystery’). He was born in 1881, of a Scottish father who had emigrated to New Mexico and who as a US soldier had participated in the historic final stand of the Sioux under Sitting Bull. His mother was an American, of half-Scottish, half-Spanish blood(Ashton-Wolfe makes much of this ”gipsy strain” which made him a ”wanderer, restless and ever seeking after excitement and novelty.”) Young Harry was born in London whilst his parents were on a visit there but he spent his childhood on the ‘prairies of Arizona and Colorado’—in The Forgotten Clue he also writes about how he was taught to ride and shoot there by “the red-skinned Sioux warriors, who, strangely enough, enjoyed showing a white boy their tricks”–then sent to school in Denver till the age of 14. He was then packed off to a boarding-school in Cannes, and thence to university in Heidelberg—giving him, as he points out, an unrivalled facility in three languages, and the love of travel, not to speak of European glamour to add to American derring-do.

But it’s a youthful holiday in Monte-Carlo that introduces him to his future career when, on nightly visits to the Casino, he befriends a ”dapper little Frenchman” , Monsieur Blanchard, who enlists his help in watching another gambler—an American named Big Jim Cowley. Of course, M. Blanchard turns out to be from the Surete, Big Jim is soon unmasked as a crook of the first order, and the adventure not only whets Ashton-Wolfe’s appetite for more excitement, but sees him eventually accepted as assistant to Dr Alphonse Bertillon, in Paris, working with him on many extraordinary cases. In this capacity, he also collaborates on occasion with detectives from Scotland Yard and the US. Later, due to his familiarity with foreign languages, he acts as ”interpreter to the civil and criminal courts” in Britain–in which capacity he appears to have written many of his books.

Perhaps he might have been able to retire though, for his books were best-sellers in the genre, going through many editions worldwide, and garnering glowing reviews: ‘Out-thrilling the thrillers’–‘Exciting studies in international crime’–‘Unsurpassed as a narrator of authentic crime stories’. The public’s appetite for true as well as fictional crime in the Golden Age of the detective novel was huge, and as well as his books, Ashton-Wolfe wrote articles for magazines such as The Strand as well as the true-crime magazines which flourished in the Golden Age of the detective novel. And his stories influenced other contemporary writers. For instance, ‘Sapper’, the creator of the Bulldog Drummond adventure series, was inspired by two of Ashton-Wolfe’s cases: the diabolical Hanoi Shan, and the anarchist bandits Jules Bonnot and Octave Garnier, for his 1929 novel,  The Temple Tower(as well as basing a character, Victor Matthews, on Ashton-Wolfe himself). And in a nice touch, Conan Doyle himself used a story recounted in Crimes of Love and Hate, about an Italian swindler who claimed to have created a death ray, as the basis for one of his Professor Challenger stories, The Disintegration Machine.

Ashton-Wolfe’s work was also the basis for a popular pot-boiler film, Secrets of the French Police(1932), where he is credited as writer. Other films may have been planned; but questions as to the authenticity of his recitals began to surface, and no others were produced. As well, with his style beginning to seem old-fashioned, his books started to fall out of favour, and eventually were forgotten so completely that not a single one remains in print.

Just how much—or how little–of his biography, let alone his claimed exploits, is authentic, I have no idea. Much of it, I suspect, needs to be taken with a fairly large grain of salt. Trying to find information that isn’t part of the persona Ashton-Wolfe built for himself is like trying to write on water. But it doesn’t really matter. For the books are truly wonderful period pieces, some of which  deserve to be reprinted in their full glory, cheesy photographs and all.

One thought on “Harry Ashton-Wolfe, true-crime writer of ‘the Golden Age’”