Like Jean Kent, acclaimed novelist and journalist Susan Johnson was fortunate enough to be awarded two residencies at the Keesing Studio: in her case, as she explains in her interview, through sheer serendipity.

When were you the Keesing Studio resident? And why did you decide to apply for it?

I was the Keesing Studio resident twice – once in 1989, from June or July I think – and once again in 1991, when someone unexpectedly dropped out and I happened to be in Europe anyway, so the Australia Council didn’t have to pay for an airfare, and popped me in as a sort of emergency replacement. The first time, in 1989, I followed my ex-boyfriend, the writer Tony Maniaty, into the studio, so it was a bit like old-home week (we were amicably separated and remain good friends).

What did you work on when you were there, and did it change from your original vision as a result of the residency?

I decided to apply for the residency all sorts of reasons, not just one. I was a relatively new writer then, with a first novel published (Messages From Chaos, first edition Harper and Row, Sydney, 1987) and editing my second (Flying Lessons, Heinemann, Australia, 1990; Faber and Faber, UK and US, 1990 and in translation, Actes de Sud, 1992). Being published by Faber was like a dream to me – the publisher of Hughes and Plath and Eliot and every literary giant I had long revered. Honestly, that year – winning the residency and being published by Faber – was like heaven. All year I felt blessed, and very, very grateful.

What were your first impressions of the Keesing studio itself, and its neighbourhood, and how did that evolve over the course of your residency?

I knew from Tony (via a letter! No email back then, no Facebook, no Twitter) pretty much what to expect. I knew it was a relatively ugly new building in the midst of much beauty (the Marais), and Tony was still in situ when I arrived, so I saw the lino, the unadorned windows, the narrow cot for a bed. But I also saw beauty and freedom and a wonderful, wonderful gift. I adored it – the way Tony (in his Greek-Australian fashion) had built shelving in the kitchen and divided the room, and everything looked clean and bright and shining. I could lean out the window and find Paris at my feet. I was breathless.

Funnily enough, only last year, Christmas 2014, I was in Paris again (editing my eighth novel, The Landing, Allen and Unwin, 2015) and a writer I knew then only in passing but who was in residence at the studio, Emily Maguire, invited me over to see it. I was pretty shocked at how run down it had become in the 20-odd years since I lived there. It looked very old and tired – but I could see that to Emily it was still glorious.

When I was there, I loved the Marais at once. I loved Paris too – my only other experience had been my first trip to Europe, aged 18. I was a young journalist then, what was known as a cadet reporter, a school-leaver who was supported by my employer to undertake an arts degree at the University of Queensland at the same time. I had never studied French and couldn’t speak a word, and was with another young woman who also couldn’t speak French. Back then, no-one wanted to speak English (this would have been 1976) and we couldn’t even work out how to negotiate the metro. We didn’t know “sortie” meant exit, that’s how bad it was, and when we tried to ask anyone for help, they walked straight past, possibly assuming we were beggars. That experience was seared into my brain, so I had studiously attended Alliance Francaise classes, in Brisbane and Sydney before I left, but I was pretty nervous about what I would find. It was such a relief to find that even a bit of French made a difference: either the French had changed, or I had. Everyone was lovely.

I feel completely in love with France – and the idea of France shall we say – and I have never fallen out of love since.

My favourite things were everything: the air, the sky, the trees, the food, the people, the stones, the way manners acted as a form of civilization itself, civilization made visible. The way that being a writer was an actual thing, it had a meaning, a value, indeed it was admired – unlike in Australia, where – arguably, still – being a writer equals being a wanker, or someone who has tickets on themselves, or someone who thinks he or she can get away with something – or does get away with something. Arguably, there is still hostility in Australia to anyone engaged with the weird, invisible practice of writing. I wrote an essay – or rather gave a lecture – on this very subject to the National Library of Australia on this very subject – here http://www.nla.gov.au/ray-mathew-lecture/2011

Only now, from a great distance of more than twenty years, can I speak about my least favourite things – but they are not specifically about Paris, more about France. And that is the elitism and possible racism against Pied Noir, Algerians and latterly Muslims, and France’s tendency towards xenophobia – but I also believe this tendency is overwhelmed by France’s greater love for liberte, egalite, fraternite…..I was there for the Charlie Hebdo marches, and there were Muslims, Jews, Christians, secular non-believers. I lived in the UK for ten years and the class system there is far more rigid than it is in France – I would still rather be a poor person in France than a poor one in England. I remember living in a flat in the 13th once, when a building site was across the road. All the workers – if they didn’t go to a restaurant at lunch time – would sit down with a fresh baguette, a cheese, a half bottle of wine and eat and talk. In England they would eat working class food – at least in France food is equal, and that to me is symbolic of so much more.

What did you think about it as a writing/ideas environment? 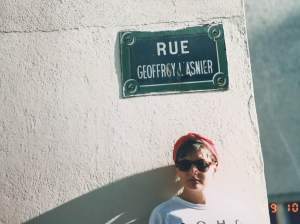 Perfect. Unlike others, who went to cafes, I like best a plain simple room without distractions. No views, nothing. But I had a view out the open window, the beautiful curling old building across the street, the tips of buildings. It was heaven – quiet, cell-like, magnificent.

Tell us about your favourite Paris places–sites, culture, food.

See above. But what I also got to love was the American Library and the American bookstore (I found the three volumes of Margaret Anderson’s extraordinary memoir there – she started The Little Review and was Joyce’s first publisher and France was her spiritual home). I made friends – French friends – who became my friends for life and through knowing Simone and Jacqueline and Maica and the rest I was lead into a richer and fuller life in France – into Monterlot (near Fontainebleau) and Fitou in the south, and Corsica where Simone climbed mountains in the winter and where her friend died in summer on the beach – Corsica, possibly the most beautiful place on earth – and I found myself searching for cep mushrooms in the forests in autumn, where the Italian in our group wanted to fry them in oil and garlic and Jacqueline, the Frenchwoman in our group, regarded this as a tragedy. A mushroom! A piece of fruit from God’s earth, the fate of which could be debated with such fire! I loved France for this – for caring about the fate of a mushroom.

What experiences stand out for you in the time you spent in Paris?

Once I sat at an open window of Chez Julien with the man who would become my first husband. You could still smoke in restaurants then and I leant on my elbows and looked up into the Paris sky: right then, I had everything. Love, a full belly, a head ringing with ideas. I would write everything! I would eat up existence! I was full to bursting.

Do you think the residency has had a lasting impact on your work, and if so in what way?

Yes, yes, and yes. That year in Paris changed everything: I burst free. I had jumped off – into love, into my work, into my real life, at last. From there I spent years away from Australia – in Hong Kong, in Boston, New York, ten years in London. I learn who I was in the world. I learn to reach the limits of myself, in that, at last, I learnt my limitations. But those initial months in Paris were the key to everything that followed. The studio residency was my open door.