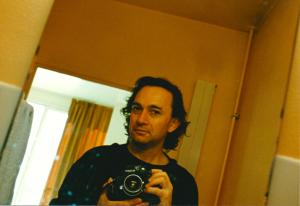 Today I’m interviewing award-winning author, journalist, reviewer and screenwriter Tony Maniaty, who was resident at the Keesing Studio only four years after its lease was gifted to the Australia Council’s Literature Board by Nancy Keesing. (All photos © Tony Maniaty 2015)

When were you the Keesing Studio resident? And why did you decide to apply for it?

I was the Keesing Studio occupant for the first six months of 1989. I wanted to spend some time in Paris writing a novel, a long-held dream, so I figured six months would cure me. As it happened, I ended up staying in Paris for three years. I actually didn’t get the residency first time around, I applied but missed out – and then the person who was to go pulled out, and the Australia Council rang me and said, ‘Can you go?’ I was pretty much on the next plane, although the flight itself turned into a nightmare. As we approached Europe, the captain informed us that violent snowstorms were blanketing all major airports. We would have to divert to either Brussels or London; in line with French democracy, the passengers all took a vote, and Brussels won. We then took a bus through blizzard conditions down to Paris, where I discovered my luggage was lost. So I spent the first two days in Paris running around buying fresh underwear. But I was in Paris and that was all that mattered.

What did you work on when you were there, and did it change from your original vision as a result of the residency?

I had two projects. I was editing my second novel ‘Smyrna’, so had the very enjoyable task of sitting with my Penguin editor Bruce Sims in the studio fixing the book line by line. Since it was Paris, we also consumed a fair amount of wine. (I maintain the novel was the better for it, and I’m sure Bruce agrees.) Then I moved onto what was to be my third novel, titled ‘The Conduct of Arrows’, set in Brazil in the early 1960s. I’d been to Brazil for research in 1986 and brought copious notes and files to Paris, ready to crack ‘the big one’, the one that would really launch my career. I started writing about the tropics of Brazil in the depths of a miserable European winter, and by spring I had a first draft. Penguin wanted to publish but I wasn’t happy with it. My six months was up, and, out of cash, I returned to Sydney to work as a producer on the SBS World News desk, which quickly saw me turned around and sent back to Paris as ‘Dateline’s’ European correspondent, a gig that lasted until 1992. Paris again had me in its wonderful grip. Little did I know that the Brazilian novel would sit in a drawer for another twenty years or more before I tackled it again, with a new title, ‘The Fish Will Swim in Thy Dark Streets’. I’m just polishing what I hope will be the final draft now, but you never know…

What were your first impressions of the Keesing studio itself, and its neighbourhood, and how did that evolve over the course of your residency? 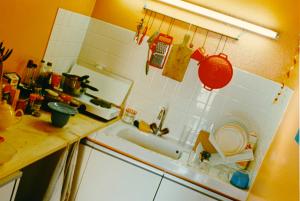 When I walked into the studio it was pretty bare, there was virtually no kitchen bench space, and being of a practical bent, I immediately took the Metro to  the nearest timber yard, bought some wooden planks, discovered the location of the BHV store (a kind of Parisian Bunnings) and bought nails and cheap tools and got to work. For the first day or so I was building, not writing. I prowled the surrounding Marais streets by night and found some leftover furniture and set myself up in the studio like a second-hand king. I built a kind of folding screen to make a separate office space. The only thing that irked me was the single bed (since I was single) but the notorious Madame Bruneau – fierce moral guardian of the Cite des Arts – would not countenance swapping it for a double. There was a tiny TV set, black and white. Once I’d set up the kitchen I was cooking my beloved pasta and happy as Larry.

I went alone but a strange thing happened: I met a French woman. This turned into a torrid affair, complicated by the fact that (a) she was married to an Englishman, and (b) she had an 18-month-old daughter. It was further complicated by the fact that their best friends in Australia had asked me to deliver a present for the girl, which I duly did. One thing led to another and I had to write back to my Australian friends to inform them that not only had I delivered the present for the baby girl but that I had run off with the mother. (The husband, I discovered to my relief, had recently left her.) So my Paris sojourn began to resemble a Feydeau farce. As spring came, Paris turned into the great outdoor city it is, and I came to love almost everything about it. The food, the markets, the bookstores, the art stores, the cafes, 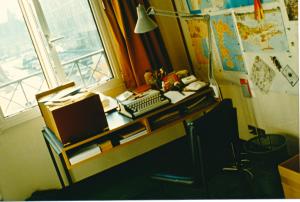 even now I struggle to think of anything I didn’t like in that city.

What did you think about it as a writing/ideas environment?

The Keesing studio was a good place to work at night, but by day I found it gloomy; it was a relatively new concrete building in a wonderful old neighbourhood, the worst combination, and whenever I could I escaped to write in libraries and cafes, or along the quays if the weather was fine. But I wasn’t complaining; the studio was in perhaps the best location in Paris, it was clean and rat-free, and best of all, it was free. I did all my manuscript typing there. (This was in an era where typewriters were still considered practical tools, not curiosities.) I should mention that when I was awarded the residency, there was no living stipend attached; I explained to the Australia Council that I couldn’t live in Paris on love alone, and they agreed and came up with $10,000 for the six months, which thereafter became a fixture of the residency.

Tell us about your favourite Paris places–sites, culture, food.

I loved the Jewish restaurants in the Marais, which back then was not trendy by any means; there were still plenty of trades and working class people around, and the odd derro lying on the footpath, although by the time I returned to Paris, it was already starting to show signs of gentrification, and now I find the area insufferably self-conscious. Bars and cafes: my regular haunts were the La Tartine on rue de Rivoli in the Marais, said to be where Trotsky had written his radical texts (and where the toilets had not been renovated since) and La Palette on rue de Seine, filled with the bartered artworks of students from the the Beaux-Arts across the street. Food: my favourite restaurant when I could afford it was the Balzar, in rue des Ecoles near the Sorbonne, where the dry old waiter got to know my order: cold lamb with green salad and fresh mayonnaise, and a glass of Morgon rouge. I loved the Metro too, and prided myself on knowing the shortest ‘correspondences’ between stations. Notre Dame did nothing at all for me, nor the Louvre very much, but the Musee Quay d’Osay housed possibly my favourite painting in all the world, Van Gogh’s ‘Portrait of Doctor Gachet’. It was always incredible to see it hanging there.

What experiences stand out for you in the time you spent in Paris?

I was invited by a new-found friend to her parent’s place one afternoon, they were ‘having a few people over’ for drinks. The ‘place’ turned out to be the entire top floor of a building in Saint Germain du Pres, an apartment of about twenty rooms, and the 200 or so people there quaffing Bollinger were attending the Paris Air Show, and were aircraft dealers, i.e. people who bought and sold Jumbos to airlines and fighter planes to African dictatorships. For a boy from Brisbane, even for a journalist and author from Sydney, this was a heavy crowd. Paris, behind its charming facades and lanes, was home to some of the richest people on the planet. At the other end of the spectrum, I loved sharpening my HB pencils in the Cafe Select and drinking my coffee and being left alone to create for hours on end. The fact that everyone in Paris saw this as normal adult behaviour was enlightening.

Do you think the residency has had a lasting impact on your work,and in what way? 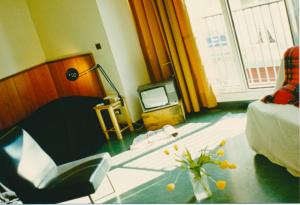 Paris taught me the value of literature, and its social standing in a civilised society. I had in early 1989 had only one novel published by Penguin, and another about to be released, but the words ‘Penguin’ and ‘novel’ seemed to create some magical ether that opened doors at all levels. I met the head of the French equivalent of the Literature Board, and asked him if they had negative front-page stories in France about writers getting grants from the taxpayers funds – as we did at the time in Australia. He looked at me, just a little baffled, and asked how much money was involved. I had no idea, but I think I said something wildly extravagant like $5 million a year, hoping at least to impress him. He shook his head, unbelieving. ‘But merde,’ he said, searching for a metaphor. ‘That’s just… that’s just… the wing tip of a fighter plane!’ My time among the Parisians gave me enormous respect for French cultural values, not to mention their sense of theatre.