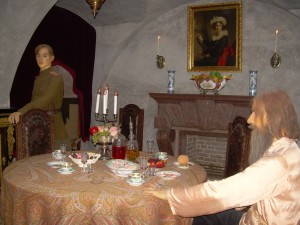 My new adult novel, Trinity: The False Prince, comes out very soon, as you might have realised from all the enigmatic clips I’ve been posting, with quotes from the book! And now, a piece of mine about a spooky visit I made to the scene of Rasputin’s murder, in St Petersburg, has been published on the Momentum blog.

It’s in one of the grand gilded living rooms of the palace that you get the first glimpse of the horrible events of December 30, 1916. A group of rather creepy waxworks representing some of the conspirators is huddled around an old phonograph. ‘Waiting for Rasputin,’ the guide says, ‘they listened to the same record over and over.’ They were nervous. Rasputin was a favourite of the Tsar and his family and they could not be sure how he would react over his death.’ But it wasn’t here this room that Rasputin was lured to his death; oh no, though the prince, pretending friendship, had invited Rasputin to come and take tea at the palace, he had no intention of letting this ‘dirty peasant’ set foot in the fine rooms of the palace. No, Rasputin was to come to the basement.

You can read the whole thing here.