I’ve cross-posted this short, appetising extract from Jules Verne’s Mikhail Strogoff on my food blog. Appropriately, it features a description of food, from a fantastic, colourful chapter where our hero stops for the night at the town of Nizhny Novgorod, where a massive multinational fair is taking place.

And thus Mikhail Strogoff found himself wandering through the town, not unduly troubled, on the lookout for some form of accommodation where he might spend the night. But he was not trying very hard and, had it not been for his gnawing hunger, he would probably have wandered the streets of Nizhny Novgorod until morning. For he was more interested in a meal than a bed. And he found both under the shingle of the Town of Constantinople. 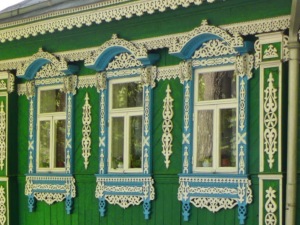 The innkeeper there offered him a perfectly satisfactory room, sparsely furnished, but equipped with both an image of the Virgin and portraits of various saints, for which some golden fabric served as frames. He was promptly served up some duck stuffed with spiced mince, drowning in a heavy cream sauce, some barley bread, some curds, some cinnamon-flavoured sugar and a mug of kvass – a type of beer very common in Russia. He would have been satisfied with less. So, he ate his fill; more so than his neighbour at the dining table, who, being an adherent of the ‘Old Believers’ movement of the Raskolniks and having taken a vow of abstinence, left the potatoes on his plate and was careful not to add sugar to his tea.

Having finished his supper, instead of going up to his room, Mikhail Strogoff headed automatically back out to resume his walk around town. But though the long twilight was still drawing on, the crowd was already dissipating, and little by little the streets were emptying as everybody headed for home.

2 thoughts on “A menu from Jules Verne’s Mikhail Strogoff”