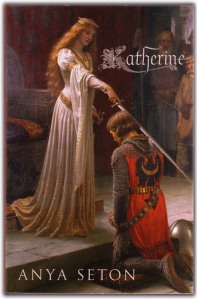 This, the third of my republished articles on writers and classic works, focusses on the great American historical novelist Anya Seton, in particular her most famous and beloved book, Katherine. In the article, I also looked at Anya Seton’s fascinating family history. My article was first published in the Summer 2006 issue of the lovely UK books magazine Slightly Foxed.

It was in the school library on a somnolent Sydney summer afternoon that I first met her. A passionate, but bookish and rather inarticulate child, I had recently discovered romantic novels—devouring Charlotte Bronte, Daphne du Maurier, Georgette Heyer, Jean Plaidy/Victoria Holt, and Mary Stewart, swept up into their worlds, loving them all. But meeting Anya Seton’s Katherine, as she set out on that ‘tender green time of April’, on a journey that was to take her from sheltered convent girl to controversial great lady, was the most wonderful delight of all.
Though Katherine de Roet, later Swynford, was, I was sure, infinitely more beautiful and gifted than me, though she lived in such a different time and place, I clicked instantly with her, and with the gorgeous book in which she lived and breathed with such intensity.
I was just about Katherine’s age–nearly sixteen–and I too had spent years in a convent—a convent school, in my case– and I was itching to go out into the world, and especially, fall in love. The separation between us—a gap of some six hundred years—seemed meaningless. I was with Katherine every step of the way, from her first introduction to the royal court, where she meets the man who will forever change her life, though she does not know it yet—John of Gaunt, Duke of Lancaster, the King’s dazzling third son. It is not love at first sight. But love is kindled between them, it is a passion as unstoppable as it is overwhelming, one that will bring in its train not just delight, but murder, madness, and exile. And the evocation of that grand passion by Anya Seton—particularly in the early stages of the affair, when Katherine and John spend several enchanted days in the remote castle of La Teste, in Les Landes, in Gascony (a region of France I knew well, as part of my family comes from there) was so thrilling to my adolescent self that I must have worn out those pages re-reading them, savouring each time that intoxicating mixture of languor and excitement, of sex and romance, of poetry and passion. This is not an uncommon reaction; lots of readers, and not only female readers, have felt this way—my husband tells me that as a 15 year old in England, he read Katherine twice, especially lingering on those passages!

But though passionate love forms its incandescent centre, Katherine isn’t just about love. It is also an exceptionally rich, detailed, and utterly believable evocation of a tumultuous time—the mid to late 14th century, dominated by war, the Black Death, and religious and political rebellions. In its pages we meet not only Katherine and her royal lover, who are masterfully brought to life in all their complexity, but also a whole host of exquisitely-drawn characters: Katherine’s swinish, tormented husband, Sir Hugh Swynford; their daughter Blanchette, who will grow up to condemn her mother; John of Gaunt’s strange little Gascon squire Nirac, who takes it upon himself to perform a terrible service for his beloved master; Katherine’s brother in law, that brilliant observer of his time, Geoffrey Chaucer; John’s lovely, serene first wife Lady Blanche and his odd, spiky second wife, the Castilian princess Costanza; the English mystic Lady Julian of Norwich, who comforts Katherine in a period of extreme suffering—and many, many more. It’s not only characterisation at which the author excels, however; the historical setting, the background of major events, such as plague, war, and rebellion, as well as the innumerable details of ordinary life, are flawlessly recreated.

Katherine not only enthralled me and made me interested in that time: it totally changed my idea of Chaucer. We had to study ‘The Knight’s Tale’ the year after I read the book, and it made the whole thing much easier, because rightly or wrongly I could visualise Geoffrey as a person. As well, it made the experience of Katherine even more real—reading the work of a man who had actually known her in life was exciting, a kind of reflected glory that quite reconciled me to the funny spellings!

Reading Katherine again now, not only as an adult, but as a writer myself, I am struck by how very good, even brilliant, it still is. There is nothing dated about it, either in style or in character or in essence. In certain ways, it reminds me of that other magnificent novel of fourteenth-century life, Sigrid Undset’s 1920’s trilogy Kristin Lavransdatter—in the rich evocation of a woman’s emotional, spiritual and intellectual journey as much as that of the time—and it is quite possible Seton was influenced by Undset’s work. But Katherine is also very much its own thing, distinctively beautiful, perfectly pitched, Seton’s masterpiece, and one of the great twentieth-century historical novels in English.

Back in my teens, after reading Katherine several times, I rushed off to look for other Anya Seton titles. Though none quite had the stunning impact of Katherine, I enjoyed them all. Two especially I still remember with great fondness, and have had much pleasure in re-reading: Green Darkness, a part-historical, part-fantasy novel, shuttling between the 20th and 16th centuries; and Dragonwyck, a rather Rebecca-like novel set in 1840’s upstate New York, centred around the haunted New York Dutch family, the Van Ryns, and their mansion, Dragonwyck. Though there are several editions of Seton novels still in print, it is those three—Katherine, Green Darkness and Dragonwyck—which have just(2006) been reprinted in beautiful new editions by Chicago Review Press in the US. Both Katherine and Dragonwyck feature forewords by the popular modern historical novelist, Philippa Gregory. 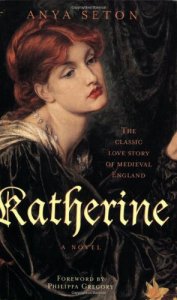 It is only recently that I have learnt just who Anya Seton was, and realised that her life was as extraordinary as her fiction. Born in New York in 1906, she was christened Ann, the only child of two wealthy, prominent writers: Ernest Thompson Seton, and Grace Gallatin Thompson Seton. Ernest, who was born in Northumberland but migrated with his family to Canada as a child, was a world-famous naturalist and anthropologist, as well as an adventurer, an artist and writer. From an early age, he was fascinated by both the natural world and the world of the Native Americans, and as an adult, he spent a long time travelling, living in the wilderness of Manitoba, tracking animals and learning skills from the Cree Indians. 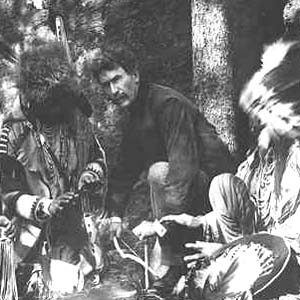 A gifted artist who had exhibited in Europe and America, he had written and illustrated several natural history books before publishing the book that made both his fame and fortune: Wild Animals I have Known, published in 1898, and never out of print since. As well as publishing several books, he was a famous lecturer, was co-founder of the Boy Scouts of

America—an organisation he resigned from in protest against its militaristic stance when World War I broke out—as well as founder of the Woodcraft League, which he set up in opposition to the Scouts, and which was based on a respect for the natural world and also for Native American culture and knowledge. Ernest Thompson Seton is still well-known in America, and there is even an Institute dedicated to him, while his Woodcraft League continues to flourish.

His wife Grace, daughter of a beautiful Californian socialite who, after her divorce, had come to live in New York, was no slouch either. She wrote several very popular and highly-regarded ‘personal travel’ books, recounting her own adventures in all kinds of wild and foreign parts. 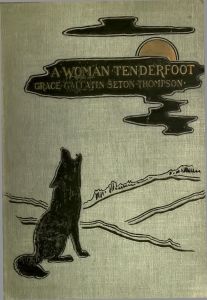 She was also president of the Connecticut Women’s Suffrage League, served two terms as president of the National League of American Pen Women, and organised, and later, commanded, a women’s mobile relief unit in France in World War I! Ann was brought up in the family mansion, under the care of a nanny, and later went to boarding school, but she also travelled a great deal with her parents. She was apparently a hauntingly beautiful and very intelligent child, but though she did well at school, did not go to college. Instead she got married at nineteen and ran away to Oxford with her new husband. Perhaps the artistic hothouse that was home was just a little too much for her! (As was perhaps not surprising given the strong wills and personalities of Ernest and Grace, they divorced in 1934).

It was not until Ann was in her early thirties, and herself already divorced, remarried, and with three children from those two marriages, that she fulfilled a long-held dream of becoming a writer. As Anya Seton, she published her first novel, My Theodosia, in 1941. She obviously had her father’s golden touch: the novel was an immediate bestseller. More successful novels followed, some of which, like Dragonwyck, were made into Hollywood films in the 40’s and 50’s. Over a 34-year career, which included many long periods travelling and researching, she wrote twelve novels, some of them ‘straight’ historical novels, like Katherine, others mixtures of fantasy, the supernatural, and history, like Green Darkness. Her last novel, Smouldering Fires, was published in 1975; the author herself lived for another fifteen years after that. Though all her novels were popular worldwide, it is definitely Katherine which to both critics and readers alike represents the high point of her considerable gifts, and which will live forever in the minds and hearts of thousands of once-were-teenagers, now grown men and women.