I wrote this story of unexpected magic quite some years ago, and it’s been popular with readers, so I’m republishing it here today. Enjoy! 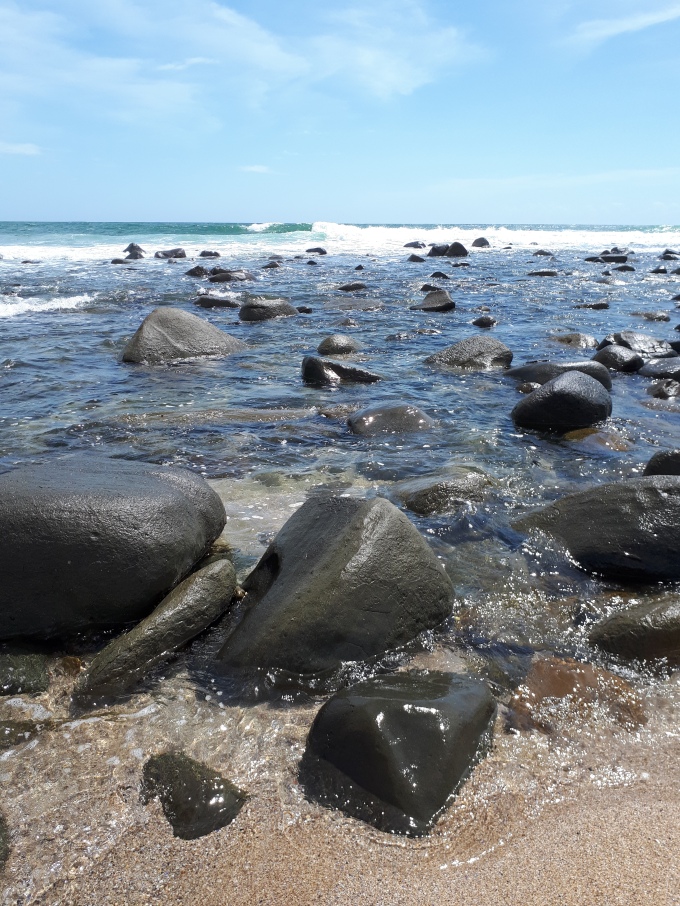 The summer my grandfather disappeared, I had been with him, as was usual during the holidays. We’d spend the weeks just swimming and fishing and talking. Grandad was a great talker. Mum reckoned he could talk the hind flipper off a dolphin! It was a good picture to have of Grandad, if you know what I mean, because he was really a sea person.

He and Grandma, both. Every year, when she was still alive, they’d lock up the farm and head for the coast. Grandma was a wonderful swimmer; she’d nearly been chosen for the Olympics. It was hard for her, living at the farm; yet she loved it, loved Grandad, too, so she didn’t complain. But when she died, Grandad sold the farm and everything in it, and moved permanently to the coast. He said he felt closer to her that way; reckoned her spirit was in the sea, watching.

The only thing he’d brought back from the farm was the clock. His Neptune clock, as he called it. He had found it in a junk shop years and years ago before he and Grandma were married. I’d known it all my life. You just couldn’t imagine Grandad without it. That clock was a remarkable thing: a grandfather clock, with a glass front, a cedar case, and a carved brass face. Around the Roman numerals were all sorts of sea-figures: dolphins, seashells, a mermaid, seahorses. And the figure of an old man, holding a trident. Neptune, god of the sea, Grandad had said. When I was little, I used to think secretely that Grandad had been the model for Neptune’s face: kindly, thin, as filled with lines as a spider’s web. That clock ticked and tocked and bonged through all our days together; Grandad reckoned that it kept him going. He loved that clock, and used to polish it regularly. And when it stopped, he would open the case with a little key, a lovely brass key in the shape of a dolphin, and start the weights up again. And while he started it, he would tell me endless stories, stories of when he and Grandma were young, stories of the farm and the animals he’d had, stories of the sea. My favourite was that old Scottish story of the selkie–you know, the seal woman who is captured by a fisherman but eventually returns to the sea, leaving her family on land. It’s a sad story, and Grandad’s eyes always looked wet when he told that one. Sometimes I wondered if he thought of Grandma, then, Grandma, who’d so loved the sea, who’d seemed so at home in it…

I’m not sure when I noticed Grandad was a little different, that holiday. I think it started when I found him down at the beach, early one morning, without his beloved rod, just gazing out to sea. ’I saw the dolphins again today,’ he said. He turned to look at me, his blue-green eyes full of excitement. ’They’re coming closer!’ I nodded. I didn’t quite understand his urgency, his excitement, but it was nice to think of them out there, playing, leaping, the brilliant sea sparkling off their skin like scattered gems. Grandad sighed a little, and rubbed at his eyes. ’I don’t really feel much like fishing, these days.’ I looked at him sharply, but he had not sounded weary, only a little restless.

I watched him carefully for the next few days, but he seemed to be just the same as ever. Only occasionally he’d interrupt his talking and look out of the window at something I couldn’t see, but it was only a moment. Next moment he’d be back chatting and spinning yarns. And in its corner the Neptune Clock chimed out its creamy slices of days, chiming in with the rise and fall of his voice.

But then one morning–that morning!–I woke suddenly. The house was perfectly still; almost as if it was listening. Something in the quality of that silence made me jump up and fling clothes on. I ran from my room into the kitchen. No-one there. I looked in Grandad’s room. No-one there. The bathroom door was open–no-one there either. Behind the door, fishing rods, boots and all were still in place. But the clock was silent, its sound stilled, somehow adding to my fear.

There was no-one on the beach, and in the silver light of morning I ran and stumbled across the windswept sand, calling for Grandad. I ran and ran, my heart thumping and swelling with knowledge that I didn’t want to face.

It was near the end of the beach, as you go round into the next one, that I found them. His clothes, I mean. Even then, I shouted, ‘No!’ and looked around frantically for him, my eyes almost splitting from the enormous tears that ran all over my face.

Suddenly, there was an unusual movement in the long rolling waves uncoiling before me. Through the tears, I saw two backs, arching, sleek grey bodies slipping in and out of the silken water. Closer they came, closer; and then…People have told me I’m crazy, since then, that it’s just wishful thinking–but I swear that one of those dolphins’ faces was lined, as crazily as a spider’s web, with humorous, sea-change eyes, eyes that had so often been turned on me. And then I watched the dolphins, playing, leaping, looking for all the world like loving people who have found each other again after a long absence…

I can’t tell you how long I stood there, how long they stayed there. But after a while, I walked back slowly to Grandad’s house. And there, on the hall table was the clock key. I picked it up, and turned it over in my hands. ’It’s time, then,’ I whispered. I inserted the key gently into the keyhole.

It opened easily and there, under the weights, was a note in Grandad’s writing: ’This is your clock now, Jessie. It will be a good friend.’ And then followed instructions for starting up the clock. Carefully, I followed them. Then as the clock started ticking again, I looked up at it–and caught my breath. For the Neptune figure, the one which had once had Grandad’s face, stared back at me with a highly-polished grin, out of a face I knew well. Of course I knew it well. I saw it in my mirror every morning.