Later this year I will have a story published in The X Files: Secret Agendas, an official tie-in anthology for the television series. So it seems like a good time to reflect upon how writing fan fiction within the universes of my favourite television shows and movies, sparked off my interest in writing.

Long before I even entertained the possibility of being professionally published — in the dim, distant days of the 1970s — I was enthralled by a television series called Doctor Who. I discovered it in late primary school and became… just a little bit obsessed with it. I would watch it every weeknight on the ABC; I would collect and read (and re-read) the episode novelisations; I would pore over the tie-in magazines; and most importantly, I would dream up my own storylines.

It wasn’t long before I began tapping out ideas on my family’s old manual typewriter. I wrote stories and scripts, and even indulged in some illustrating – mostly for my own amusement. I found it all so indescribably exciting and empowering.

A little later, I discovered that there were other people just as obsessed as me. I joined the Doctor Who Fan Club of Victoria (which is still in existence, by the way) and inundated the organisers with my artistic creations. From there, I went on to join a swag of other fan clubs dedicated to all thing sci-fi, from Star Trek to Star Wars.

In high school — in the slightly brighter, and not quite so distant 1980s — I was lucky enough to spend a whole term on creative writing in English class one year. This is where I discovered that I really loved making stuff up. I learned about the craft of story writing (you know… that whole ‘beginning, middle and end’ thing); and although I now also wrote my own original stories, I still focused mostly on Doctor Who and Star Trek. 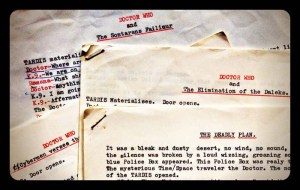 It was this fan-fic that gave me my first amateur publications – a huge boost in confidence and a thrilling taste of what it was like to have others read my writing. I wrote more and more stories for these fanzines, and even ended up editing a few myself. It was a wonderful training ground in which to develop my skills and an enormous encouragement.

Eventually, many years later in the 1990s, I would make my first professional sale. And many years after that, in 2008, I would have a story published in Short Trips: Defining Patterns, an officially licensed Doctor Who anthology. [insert fanboy squee-ing] Things have progressed well. But I will never forget that it was the creation of those early fan stories that ignited my interest in writing. Reading them now, after all these years, I can say without a doubt that they are truly awful (I don’t mean just a little bit bad – they are gobsmackingly atrocious) – but, nevertheless, their importance to me is undeniable and unquantifiable… and I look back on them with much fondness. 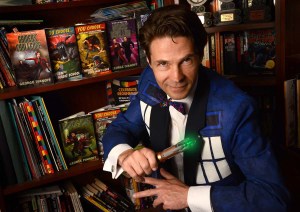 George Ivanoff is an author and stay-at-home dad residing in Melbourne. He has written more than 90 books for kids and teens, including school readers, non-fiction books and novels. He is best known for the RFDS Adventures, the You Choose series and the Gamers trilogy. You Choose: The Treasure of Dead Man’s Cove won the 2015 Fiction for Younger Readers YABBA. You Choose: Alien Invaders From Beyond the Stars has been shortlisted for the same award in 2016.

George drinks too much coffee, eats too much chocolate and watches too much Doctor Who. Check out his website: http://georgeivanoff.com.au