Today I’m delighted to feature the wonderful Adèle Geras on my blog. Adèle is a renowned British author who has written more than 95 books for children, young adults, and adults. Her best-known works for young people are Troy(shortlisted for the Whitbread Prize and Highly Commended for the Carnegie Medal); Ithaka; Happy Ever After(previously published as the Egerton Hall trilogy) Silent Snow, Secret Snow, and A Candle in the Dark. Her novels for adults include Made in Heaven, Cover Your Eyes, and A Hidden Life.

This week, her latest book, Two Fearsome Fairy Tales from France, with gorgeous illustrations by Fiona McDonald, comes out with Christmas Press, and to mark it Adèle has written about why she loves retelling fairy tales.

This week, two fairy tales, retold by me, are going to be published by Christmas Press in Australia.  The book is called Two Fearsome Fairy Tales from France.  They have been beautifully illustrated by 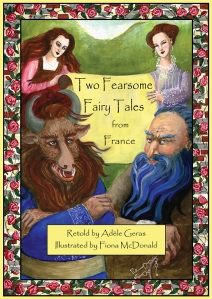 Fiona McDonald. I love the look of this book. The designers have found a fairytale font that I’d never seen before and the whole production is gorgeous. I can’t wait for it to appear.

I’m a bit evangelical about fairy tales. I was brought up on them. Almost the first thing I can remember reading for myself was a version of Rapunzel. I can bring to mind even now, decades later, the look of my edition of Andersen’s stories ( which are not all traditional, of course) with Rex Whistler’s illustrations. I think it is important that children can still read the story, and not just look at Hollywood versions of these tales.

Retelling fairy tales is one of the things I like doing most as a writer. The reason I’m often asked to do this is, I think, because back in the 90s, I wrote a trilogy of novels based on fairytales, set in my old boarding school, Roedean. They are now published together as a book called Happy Ever After.  Shortly after they came out I was commissioned to retell some fairytales and that book (Beauty and the Beast and Other Stories) is the one from which my Two Fearsome Fairy Tales from France  are taken. I’ve also retold The Six Swan Brothers as well as Cinderella and Sleeping Beauty.

For a lazy writer like me, it’s a real pleasure not to have to think of a plot. I always find working out the plot the hardest thing of all. I  always have to scratch about a bit when I’m writing something original.  This is never a problem with fairy tales.  They are there, and the reason they have lasted for so long and have been passed down over the centuries is because they are very good stories, dealing as they do with the most basic aspects of human existence: love, death, ambition, jealousy, fear, etc. They teach us that good will triumph, that the wicked will be punished and that it never hurts to be polite….look what happened to the unfortunate sister who was rude to an old woman by a well and ended up spewing toads and vipers from between her rosy lips.

Wonderful characters abound in fairy tales. Princes, monsters, ogres, dwarves, dragons, beautiful damsels who turn out to be braver and cleverer than they know, dreadful mothers, wonderful nurturing mothers, horrible husbands (Bluebeard is a lulu!) and envious siblings. The writer has nothing to do but let the  narrative unfold and all is well.

This might be thought boring but it’s not.  Just as having a fourteen – line limit for a sonnet is liberating rather than restricting, so the fact that you can’t change things too much makes you concentrate on the language. And that’s where the fun starts. I strive to make the words themselves as resonant and beautiful; as suitable to the tale I’m telling as I possibly can.

I hope very much that everyone who reads my versions of Beauty and The Beast and Bluebeard goes on to read lots more fairy tales told by lots of other people.  And I hope that someone asks me to retell another fairy tale, one of these days….