Today, I am delighted to bring you my interview with the fantastic author Anthony Horowitz, about his latest novel, The Word is Murder. Anthony’s books, whether for adults or kids, are always gripping and elegantly written, but this one is particularly accomplished, a bold and brilliant tour de force that takes big risks with literary conventions and reader expectations, and pulls it all off triumphantly. It’s one of the most interesting and memorable novels I’ve read all year.

First of all, Anthony, congratulations on The Word is Murder, a daring and playful blend of metafiction and crime fiction.  In Magpie Murders, your novel published last year, you use metafiction elements–such as a book within a book–but The Word is Murder goes a lot further. How did the idea first come to you?

Thank you for your kind words! TWIM (as we all know it) began when I met my new publisher, Random House, and they asked me to concentrate on a series of murder mysteries. My first thought was that I wanted to do something that would completely shake up the format. It wasn’t enough just to have a fat detective, a drunk detective, a Russian detective or whatever. I wondered if could alter the entire template so that we would look at the crime and the solution in a new way.

To be honest, the idea sort of fell into my lap as I was walking home from that initial meeting. Drop the author into the action. Take him off the mountain, as it were, and into the valley. Turn him into the sidekick. I knew at once it was what I wanted to write.

There are other novels in which the author has a walk-on part–such as for instance, Michel Houellebecq’s The Map and the Territory and Paul Auster’s A City of Glass–but yours is I think the first one I’ve read in which the author is both one of the main characters and the narrator, being bossed around by the other main (fictional) character! And yet, despite the extraordinary literary conceit and dazzling sleight of hand, the story never loses its narrative power and drive. What is it like to imagine yourself as a fictional character? How did you manage to juggle all the different elements, and what were the challenges along the way?

Again, you are very kind. I was quite nervous about putting myself center stage – and so, actually, were the publishers. I didn’t want the book to turn into an ego trip. But although I appear rather more than I would really like (I’ll take more of a back seat in future adventures) the book is more about my writing life rather than me personally – the focus is on Hawthorne!

When I was writing TWIM, I simply had to imagine that it was all really happening. Writers do this anyway, of course – but I had to consciously ignore the fact that I was making it up. The AH character is seldom named…and this helps me distance myself from him. You might think of him as an avatar. Yes he is me but he’s also my creation and what I think makes it fun is that Hawthorne is as much in control of him as I am!

In The Word is Murder, you incarnate the creative process through literal dialogue and interaction between the author and his characters, brilliantly illuminating the way in which writers conjure characters that feel not only real to them, but also the reader. The novel is deftly ironic yet never falls into the trap of over-signalling. How did you go about it without becoming too self-conscious?

I think I’ve answered this above. I’ve often said that writing is about immersion. I can only write Alex Rider if I totally believe in him…even when some of the action is quite fantastical. The same was absolutely true of TWIM. I had to imagine myself into it but then wrote with 100% belief.

How have readers been responding to TWIM? Do most people enter into the spirit of it, or are some people confused and think you are writing true crime(as the lady in Hay on Wye suggested in the book)?

I think it’s true to say that audiences have received TWIM more warmly than anything I’ve ever done. This is particularly true of the book blogs and the Amazon reviews. I’m really happy. People tell me that they’ve been Googling to find out what’s true and what isn’t (not that Google necessarily helps). And everyone seems to have grasped the concept. 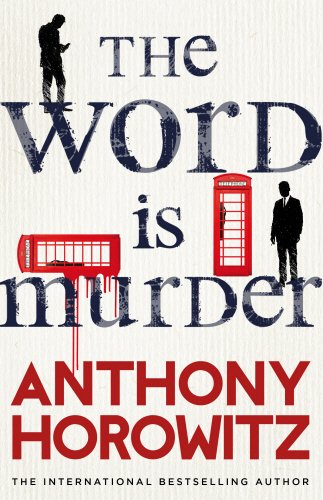 Will there be more ‘true crime’ novels featuring the ‘real fictional’ Anthony Horowitz as the sidekick to detective Hawthorne?

Absolutely. One of the most enjoyable parts of the book (to write) was the realization that something had happened to Hawthorne when he was young. To some extent, I turn into a detective as I try to find out more. The idea is to write about nine or ten books in the series and gradually to work out the mystery of Hawthorne’s past. As I sit here now, I have a fairly good idea what that might be but I won’t know for sure until I get to the end.

Yours is the second new metafiction/crime fiction novel I’ve read this year–Sulari Gentill’s Crossing the Lines is the other–which brilliantly illuminates the creative process in a highly original way. There have been other earlier works which play with those elements, such as French author Guillaume Musso’s La fille de papier (Girl on Paper) and Stephen King’s novella Secret Window, Secret Garden(which was made into the film Secret Window) but though they are gripping psychological mysteries, they both ultimately ‘explain’ the apparent boundary-crossing in a way that disappointed me as a reader(and writer). Not so with your book, and Sulari’s, which stay most satisfyingly within that narrative world. Can you expand on that, and whether you think the crime fiction lens helps to make that more effective?

I don’t know these books and must check them out. I think the short answer to your question is that I don’t really perceive any boundaries between truth and fiction. In Magpie Murders there were three distinct worlds which related to each other like Russian dolls. There was the fake world of Saxby-on-Avon where the murders took place. There was the “real” (but actually fake) world of Alan Conway, the author of the murders. And although it was only hinted at, there was my own real world – with references to Crete, Orford, the Ivy Club and real people including the radio DJ, Simon Mayo and Agatha Christie’s grandson, Mathew Prichard. TWIM simply blends them all together so there is no distinction between me working on Foyle’s War, for example, and me being attacked by a psychotic killer. So the crime fiction is not so much a lens as a landscape!

Thank you for these extremely interesting and generous questions.

Thank you very much, Anthony!

4 thoughts on “The Word is Murder: interview with Anthony Horowitz”