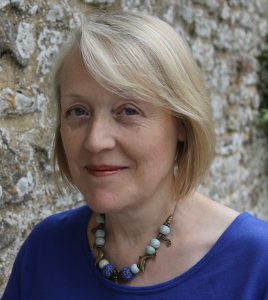 Today Katherine Langrish is writing about her five favourites.

My five top books? Of course it’s really almost impossible to choose, but here are some which spring to mind

Susan Price’s The Ghost Drum (1987) is set in a far-distant Northern Czardom where half the year is summer and light and half the year is winter darkness. It’s the tale of young Chingis, daughter of a serf but raised by a shaman woman to inherit her magical powers and her hut that runs on chicken legs across the snow. And it’s also the story of Safa, son of the cruel Czar who has kept him imprisoned since birth in a single room with no windows.  “Every moment, day and night, waking and dreaming, his spirit cried; and circled and circled the dome room, seeking a way out.” One night Chingis hears his spirit crying from far away, and she sets out across the steppes to rescue him. I have read this starkly beautiful and unsparing story over and over again. 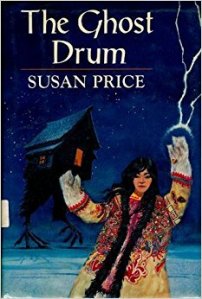 The wonderful Nicholas Stuart Gray is undeservedly neglected; I can’t think why he’s not still in print. He wrote many books and plays for children: perhaps the very best is Down In The Cellar (1961).  A family of four lively and eccentric children rescue a mysterious young man called Stephen whom they discover lying wounded and ill in a deserted quarry they were told not to visit. They smuggle him into the cellar of the rambling old house in which they are staying, and attempt to look after him.  But sinister forces are in pursuit of Stephen, and five-year-old Deirdre keeps seeing things the other children can’t – weird green lanterns shining in the dark, and a mysterious golden gate in the cellar wall. Are half the villagers really warlocks?  Where do the cats go, when they go missing? And who or what are the Spoilers? This is a very scary, very exciting and very funny book. 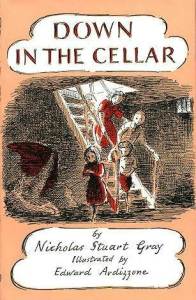 So is The Cuckoo Tree (1971) by Joan Aiken. On a wild November night some time in the middle of Aiken’s alternative 19th century, her gamine Cockney heroine the redoubtable Dido Twite is travelling from Bristol to London by coach, with her friend Captain Hughes of the Royal Navy. Shortly after singing this raucous little ditty:

If they don’t end in the Cuckoo Tree

– the drunken driver overturns the coach; Captain Hughes is injured and Dido is compelled to seek shelter for them both in sleazy Dogkennel Cottages, just down the road from neglected Tegleaze Manor. She is soon up to her neck in a plot involving smugglers, missing heirs, voodoo, witchcraft, and a scheme to send St Paul’s Cathedral crashing into the Thames with a full coronation ceremony going on inside.  Joan Aiken at her wildly imaginative, quirky best. Unbeatable! 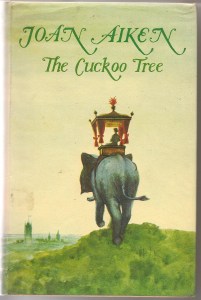 Linnets and Valerians (1964) is Elizabeth Goudge’s best book for children, better than ‘The Little White Horse’, though I love that too.  But this book is deeper, full of the harm human beings can do to one another, of darkness and loss and the waste of lives: but ultimately also of the strength of goodness to drive out evil.  Like ‘Down In the Cellar’ it features a large family of children. These – two boys and two girls – run away in a stolen pony-trap and end up living with stern but upright Uncle Ambrose high on Dartmoor, in a village reminiscent of Widdecombe.  They soon find the village is divided by old tragedy and hatreds. Is Emma Cobley, the postmistress, really the sweet old lady she seems? Who is the strange, dumb wild man who lives in a cave up on Shining Tor?  And what is the secret of the wonderful tapestry in the Manor house, and the book of black spells hidden away in a secret cupboard in the Vicarage? This hauntingly lovely book is one of my all-time favourites. 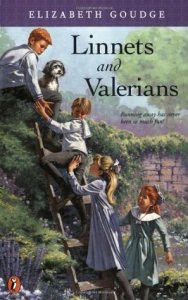 Finally I have to choose Alan Garner’s The Moon of Gomrath (1963): it made such a huge impression on me as a child. The sequel to ‘The Weirdstone of Brisingamen’, for me it’s an even richer and more exciting blend of Norse and Celtic mythology in (what was then) a contemporary setting.  So many wonderful moments – the shapeless Brollachan which flows into Susan’s body and begins to warp it, the old straight track that turns to moonsilver or curling flame, the mad, exhilarating ride of the Wild Hunt with their thrilling cry “Ride, Einheriar of the Herlathing!” and the long vigil of the elves outside the ruined manor house which is, creepily, only there when the full moon shines…  If I may add as an aside to modern publishers, the fact that aged ten I had no idea how to pronounce the Wild Hunt’s thrilling cry, “Ride, Einheriar of the Herlathing!” made not the slightest difference to my delight in the story. 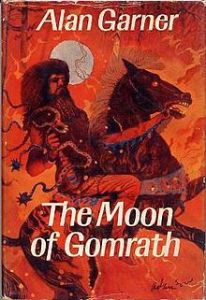